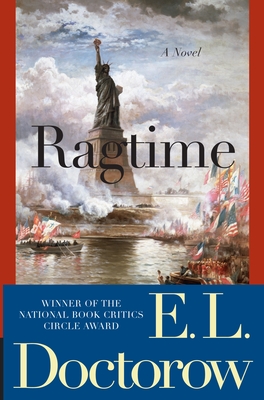 Published in 1975, Ragtime changed our very concept of what a novel could be. An extraordinary tapestry, Ragtime captures the spirit of America in the era between the turn of the century and the First World War.

The story opens in 1906 in New Rochelle, New York, at the home of an affluent American family. One lazy Sunday afternoon, the famous escape artist Harry Houdini swerves his car into a telephone pole outside their house. And almost magically, the line between fantasy and historical fact, between real and imaginary characters, disappears. Henry Ford, Emma Goldman, J. P. Morgan, Evelyn Nesbit, Sigmund Freud, and Emiliano Zapata slip in and out of the tale, crossing paths with Doctorow's imagined family and other fictional characters, including an immigrant peddler and a ragtime musician from Harlem whose insistence on a point of justice drives him to revolutionary violence.
E. L. Doctorow’s works of fiction include Welcome to Hard Times, The Book of Daniel, Ragtime, Loon Lake, World’s Fair, Billy Bathgate, The Waterworks, City of God, The March, Homer & Langley, and Andrew’s Brain. Among his honors are the National Book Award, three National Book Critics Circle awards, two PEN/Faulkner awards, and the presidentially conferred National Humanities Medal. In 2009 he was shortlisted for the Man Booker International Prize, honoring a writer’s lifetime achievement in fiction, and in 2012 he won the PEN/ Saul Bellow Award for Achievement in American Fiction, given to an author whose “scale of achievement over a sustained career places him in the highest rank of American literature.” In 2013 the American Academy of Arts and Letters awarded him the Gold Medal for Fiction. In 2014 he was honored with the Library of Congress Prize for American Fiction.