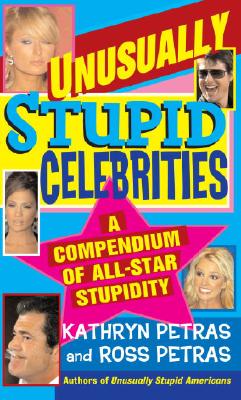 By Kathryn Petras, Ross Petras
$10.95
Availability to be confirmed

The Greeks honored Zeus, the Romans revered Juno, but modern civilization worships a different sort of god: Celebrity. Face it, we follow the stars’ every move, fashion choice, and deliciously dishy affairs. Now Kathryn Petras and Ross Petras, authors of Unusually Stupid Americans, pull the demanding divas, screwball stars, and celebu-twits off their pedestals–and prove it doesn’t take a degree in rocket science to become famous. Cases in point:

• Courtney Love misses an important court date relating to “possession of a controlled substance” because she can’t find a professional bodyguard at the last minute.
• Mariah Carey’s entourage includes a skirt-from-touching-floor specialist, a towel hand-off person, and a professional drink holder/lifter.
• Savvy traveler Paris Hilton concludes that all of Europe is, “like, French.”
• Mensa candidate and rocker Tommy Lee is pretty sure that Winston Churchill was president during the Civil War, that the numeric equivalent of pi is “the two-equals-MC-squared thing,” and that an isosceles triangle is “somewhere in Bermuda.”

Kathryn Petras collected The 776 Stupidest Things Ever Said and put them all in a book. Her other works, coauthored with her brother Ross, include Don't Forget to Sing in the Lifeboats and It All Seems Impossible Until It's Done. She lives in New York City.

Ross Petras, along with his sister, Kathryn Petras, collected The 776 Stupidest Things Ever Said. His other works, also coauthored with his sister, include Don't Forget to Sing in the Lifeboats and It All Seems Impossible Until It's Done. He lives in New York City.