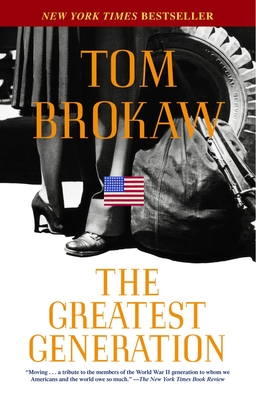 
Availability to be confirmed
The instant classic that changed the way we saw World War II and an entire generation of Americans, from the beloved journalist whose own iconic career has lasted more than fifty years.

In this magnificent testament to a nation and her people, Tom Brokaw brings to life the extraordinary stories of a generation that gave new meaning to courage, sacrifice, and honor.

From military heroes to community leaders to ordinary citizens, he profiles men and women who served their country with valor, then came home and transformed it: Senator Daniel Inouye, decorated at the front, fighting prejudice at home; Martha Settle Putney, one of the first black women to serve in the newly formed WACs; Charles Van Gorder, a doctor who set up a MASH-like medical facility in the middle of battle, then opened a small clinic in his hometown; Navy pilot and future president George H. W. Bush, assigned to read the mail of the enlisted men under him, who says that in doing so he “learned about life”; and many other laudable Americans.

To this generation that gave so much and asked so little, Brokaw offers eloquent tribute in true stories of everyday heroes in extraordinary times.

Praise for The Greatest Generation

“Moving . . . a tribute to the members of the World War II generation to whom we Americans and the world owe so much.”—The New York Times Book Review

“Full of wonderful, wrenching tales of a generation of heroes. Tom Brokaw reminds us what we are capable of as a people. An inspiring read for those who wish their spirits lifted.”—Colin L. Powell

“Offers welcome inspiration . . . It is impossible to read even a few of these accounts and not be touched by the book’s overarching message: We who followed this generation have lived in the midst of greatness.”—The Washington Times

“Entirely compelling.”—The Wall Street Journal
Tom Brokaw is the author of seven bestsellers: The Greatest Generation, The Greatest Generation Speaks, An Album of Memories, Boom!, The Time of Our Lives, A Long Way from Home, and A Lucky Life Interrupted. A native of South Dakota, he graduated from the University of South Dakota, and began his journalism career in Omaha and Atlanta before joining NBC News in 1966. Brokaw was the White House correspondent for NBC News during Watergate, and from 1976 to 1981 he anchored Today on NBC. He was the sole anchor and managing editor of NBC Nightly News with Tom Brokaw from 1983 to 2005. He continues to report for NBC News, producing long-form documentaries and providing expertise during breaking news events. Brokaw has won every major award in broadcast journalism, including two DuPonts, three Peabody Awards, and several Emmys, including one for lifetime achievement. In 2014, he was awarded the Presidential Medal of Freedom. He lives in New York and Montana.
"A moving scrapbook...a tribute to the members of the World War II generation to whom we Americans and the world owe so much."
-- The New York Times Book Review