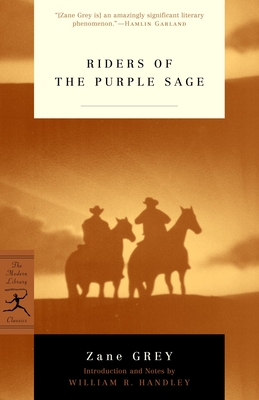 
Special Order - Usually Arrives in 1-5 Days
Told by a master storyteller who, according to critic Russell Nye, “combined adventure, action, violence, crisis, conflict, sentimentalism, and sex in an extremely shrewd mixture,” Riders of the Purple Sage is a classic of the Western genre. It is the story of Lassiter, a gunslinging avenger in black, who shows up in a remote Utah town just in time to save the young and beautiful rancher Jane Withersteen from having to marry a Mormon elder against her will. Lassiter is on his own quest, one that ends when he discovers a secret grave on Jane’s grounds. “[Zane Grey’s] popularity was neither accidental nor undeserved,” wrote Nye. “Few popular novelists have possessed such a grasp of what the public wanted and few have developed Grey’s skill at supplying it.”
William R. Handley is an associate professor of English at the University of Southern California and the author of Marriage, Violence, and the Nation in the American Literary West.
“[Zane Grey is] an amazingly significant literary phenomenon.”—Hamlin Garland