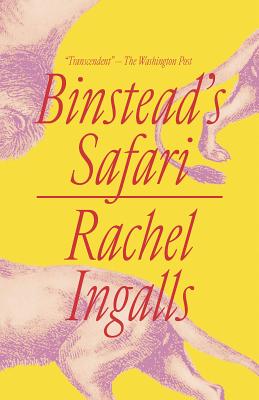 Another glorious tale of female empowerment from the author of Mrs. Caliban

After getting a haircut in London and a few new outfits (“she bought two pairs of shoes and began to enjoy herself”), Millie, the neglected American wife of an academic pill, is transformed—and, upon arrival in Africa, falls into the perfect affair. Binstead’s Safari unfolds the fractured fairy tale of the rebirth of a drab, insecure woman as a fiercely alive, fearless beauty. “Life was too short to waste time trying to find excuses for not doing the things you really wanted to do,” Millie realizes, helping herself to love and joy. The husband is astonished—everyone adores the new Millie. She can’t put a foot wrong, and as they move deeper into Africa in search of lion myths for his book, “excitement and pleasure carried her upwards as on a tide.” Mysteries abound, but in the hands of Rachel Ingalls, the ultimate master of the curveball, Millie’s resurrection seems perfectly natural: caterpillar to butterfly.

“Only now had she found her life”—and also her destiny, which may, this being Ingalls, take the form of a Lion God.

Rachel Ingalls (1940-2019) was born in Boston and lived in the UK from 1965 until her death. She wrote the novels Mrs. Caliban and Binstead’s Safari as well as numerous novellas and short stories.
Ingalls anchors her soaring premise with heavily controlled, modest prose...a domestic thriller.
— Jordan Larson - Bookforum

Perfect, original and arresting. Ingalls’s narrative is a miracle of economy and
grace: tender, exquisite, and tragic.
— Christine Smallwood - Harper's

A feminist, fabulist, magical realist romance set in London and Africa... Another witty, elegant story from a writer whose atavistic vision of romantic love is resonant and deeply satisfying. Escaping the overblown egos and endless self-indulgence of the males of their own species, Ingalls' women find their true soul mates elsewhere.
— Kirkus (starred)

Binstead's Safari is a page-turner, a romance, a comedy, a tragedy, a domestic novel and a fish-out-of-water tale, with a bit of magical realism thrown in. It’s amazing and original, and it’s great to see it back in print.

Ingalls writes fables whose unadorned sentences belie their irreducible strangeness...In her grim yet playful fashion, Ingalls is concerned with the rules and conventions by which societies are organized, the violent machinations by which they are maintained. Like a good tragedian, she tends to heap up corpses at the end of her tales, and even in her quieter examinations of familial bonds she leaves readers to wonder, of her spouses and siblings, who might push whom off a cliff.
— Lidija Haas - The New Yorker

By marrying domestic realism with the literature of the bizarre, Ingalls brings
tenderness to the monstrous and renders the recognizable utterly weird. Unabashedly campy and deadly serious, she dares the reader to admit that these
aims are not at all at odds.
— Literary Hub