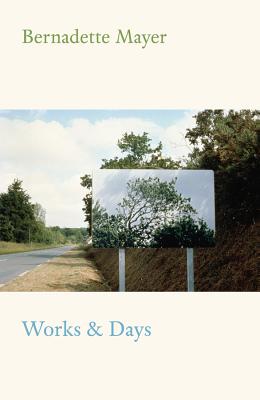 Part springtime journal (“why are there thorns?”), Works and Days meditates on the first wasps and chipmunks of the season, times’ passage, grackle hearts, and dandelions, while also collecting dozens of poems considering the Catholic Church, Sir Thomas Browne, “Go Away” welcome mats, books, floods (“never of dollar money”), the invention of words, local politics, friendships, property development, dogs, and Hesiod. Every page delights. As the poet herself notes: “My name is Bernadette Mayer, sometimes / I am at the head of my class.”

Called “a consummate poet” by Robert Creeley, Bernadette Mayer was born in Brooklyn, New York, in 1945. A most prolific poet, her first book was published at the age of twenty-three. Many texts later she continues to write progressive poetry from her home in East Nassau, New York. For many years Mayer lived and worked on the Lower East Side of Manhattan where she was the Director of St. Mark’s Poetry Project from 1980-1984. Bernadette Mayer has received grants and awards from PEN American Center, The Foundation for Contemporary Performance Art, the NEA, The Academy of American Poets, and The American Academy of Arts and Letters.
Sly, spry and unpretentious...
— Michael Robbins - Chicago Tribune

Powered by Mayer’s unique reflections on the mythologies of social and linguistic order, Works & Days possesses a rare combination of artfulness, critical acumen, and personality. The end result is a book that is at once formally inventive and disturbingly of our times.

Mayer’s poetic career embodies that generous impulse: Most of her 20-odd books and collaborations show by effusive, charming, sometimes hyperbolic example how to reject any model of poetry that requires perfection and uptight isolation. Instead, her unrhymed sonnets, her seemingly slapdash odes, her versified diary entries let her, and her readers, live in the moment, opening us up to other people’s cares and joys and ­wishes and words, in the New York City art scene where she began and in the greener parts of New York State — ­“Albany and Rensselaer counties” — that provide her territory now.
— Stephen Burt - The New York Times

Her latest collection, “Works and Days,” which came out this June, is among her very best, colliding daily struggles (menstruation, money) with natural obsessions (blue herons, mushrooms) and big unanswerable questions (Is motherhood virtuous? Whither patriarchy?). All of this is undergirded by a hefty serving of irony… Mayer writes the kind of nonsense that makes sense, and sense that is nonsense: I can’t think of a better centering device in these topsy-turvy times.
— Daniel Wenger - The New Yorker

The richness of life & time as they happen to us in tiny explosions all the time are grasped and held up for us to view in her magnificent work.
— John Ashbery

One of the most interesting, exciting, and open experimental poets.
— Tom Clark - San Francisco Chronicle

Love and the seasons and the exigencies and opportunities of daily survival are the inevitable occasions of a body of work that is as radical as it is Horatian, able as little else is both to delight and instruct.
— Edwin Frank - Boston Review