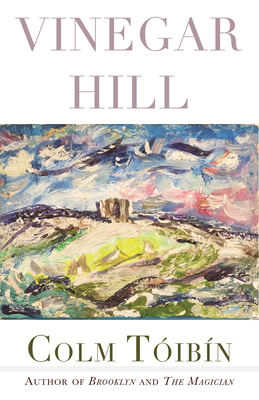 Toibin's first poetry collection, written over several decades, is pure delight. His simple language, often stripped of metaphor, aptly demonstrates the lyricism of a son of Ireland as he touches on themes of love, mortality, politics, religion, and of living through a pandemic. This collection is balm for the soul.

Fans of Colm Tóibín’s novels, including The Magician, The Master, and Nora Webster, will relish the opportunity to re-encounter Tóibín in verse. Vinegar Hill explores the liminal space between private experiences and public events as Tóibín examines a wide range of subjects—politics, queer love, reflections on literary and artistic greats, living through COVID, and facing mortality. The poems reflect a life well-traveled and well-lived; from growing up in the town of Enniscorthy, wandering the streets of Dublin, and crossing the bridges of Venice to visiting the White House, readers will travel through familiar locations and new destinations through Tóibín’s unique lens.

Within this rich collection of poems written over the course of several decades, shot through with keen observation, emotion, and humor, Tóibín offers us lines and verses to provoke, ponder, and cherish.
Colm Tóibín is an Irish novelist, essayist, playwright, and poet. He is currently the Irene and Sidney B. Silverman Professor of the Humanities at Columbia University. He has been short-listed 3 times for the Booker Prize and has won the Los Angeles Times Novel of the Year, the Costa Novel of the Year, the Stonewall Book Award, the Lambda Literary Award, and the Irish PEN Award for his contribution to Irish literature. He is a member of the American Academy of Arts and Letters and the American Academy of Arts and Sciences, and is a vice president of the Royal Society of Literature.
“A meditative probe into the language of ordinary days.”
—The New York Times

About the work of Colm Tóibín:

“The Magician recaptures a literary giant. . . . Symphonic and moving . . . Maximalist in scope but intimate in feeling.”
—Dwight Garner, The New York Times

“Tóibín’s work displays the kind of depth and sensitivity that few authors can offer. . . . The result is a beautiful, haunting portrayal.”
—The Christian Science Monitor

“A quiet tour de force: a work of deep seriousness and sympathy that gives us a genius in his full human dimensions. . . . [This] profound novel is—dare one say it?—masterly.”
—The New York Observer

“Reading Tóibín is like watching an artist paint one small stroke after another until suddenly the finished picture emerges to shattering effect. . . . Brooklyn stands comparison with Henry James’s The Portrait of a Lady.”
—The Times Literary Supplement (UK)

“A high-wire act of an eighth novel . . . Tóibín’s radical restraint elevates what might have been a familiar tale of grief and survival into a realm of heightened inquiry. The result is a luminous, elliptical novel in which everyday life manages, in moments, to approach the mystical.”
—Jennifer Egan, The New York Times Book Review