A Bone to Pick: The good and bad news about food, with wisdom and advice on diets, food safety, GMOs, farming, and more (Hardcover) 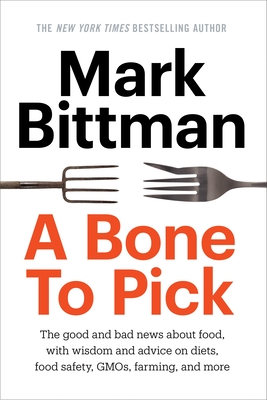 A Bone to Pick: The good and bad news about food, with wisdom and advice on diets, food safety, GMOs, farming, and more (Hardcover)


Availability to be confirmed
Since his New York Times op-ed column debuted in 2011, Mark Bittman has emerged as one of our most impassioned and opinionated observers of the food landscape. The Times’ only dedicated opinion columnist covering the food beat, Bittman routinely makes readers think twice about how the food we eat is produced, distributed, and cooked, and shines a bright light on the profound impact that diet—both good and bad—can have on our health and that of the planet.

In A Bone to Pick, Mark’s most memorable and thought-provoking columns are compiled into a single volume for the first time. As abundant and safe as the American food supply appears to be, the state of our health reveals the presence of staggering deficiencies in both the system that produces food and the forces that regulate it. Bittman leaves no issue unexamined; agricultural practices, government legislation, fad diets, and corporate greed all come under scrutiny and show that the issues governing what ends up in our market basket and on our tables are both complex and often deliberately confusing. Unabashedly opinionated and invariably thought provoking, Bittman’s columns have helped readers decipher arcane policy, unpack scientific studies, and deflate affronts to common sense when it comes to determining what “eating well” truly means. As urgent as the situation is, Mark contends that we can be optimistic about the future of our food and its impact on our health, as slow-food movements, better school-lunch programs, and even “healthy fast food” become part of the norm.

At once inspiring, enraging, and enlightening, A Bone to Pick is an essential resource for every reader eager to understand not only the complexities inherent in the American food system, but also the many opportunities that exist to improve it.
MARK BITTMAN is one of the country’s best-known and most widely respected food writers. His How to Cook Everything books, with over a million copies in print, are a mainstay of the modern kitchen, and his manifesto on pursuing a part-time vegan diet, VB6, debuted at #1 on the New York Times bestseller list. Bittman's writings on food policy and cooking appear in the Dining, Op-Ed, and Magazine sections of the New York Times.
“An intelligent rallying cry for anyone seeking a safe and healthy food supply, and all that entails.” – Kirkus Reviews

“A Bone to Pick, a new collection of Bittman’s columns and features, is destined to become a staple for those who want to consider, more deeply, what’s on their plate.” – Salon.com

“[Bittman’s] complaints about what he calls a “broken” food system are consistently balanced with viable solutions; his resounding message (“eat real food”) is simple enough, and supports his overall goal of human health and agricultural sustainability.  Bittman’s compelling essays are a call to action and a reminder to readers that the future of food – and of the planet – is in their own hands.” – Publishers Weekly

“In this engrossing, provocative look at the country’s food politics, Bittman examines the importance of creating a sustainable future for agriculture and food in the US. [A Bone to Pick] is sure to be a call for action for both readers at home and policy makers in creating a movement for a healthier future”. – Clean Eating