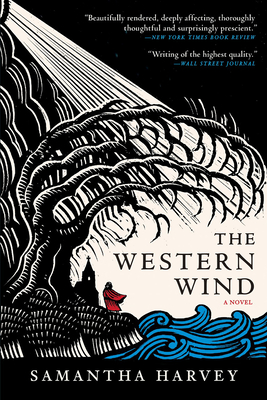 “Samantha Harvey’s deeply engaging fourth novel is far more than a medieval whodunnit. In 1491 in a dull, poor village in Somerset, England, local priest John Reve finds himself in charge of investigating the drowning of Tom Newman, the richest man in the village. Was it an accident, suicide, or an act of violence? Newman owned most of the area land and the economy of the village depended on his generosity. Who will benefit the most from his passing? Pressured by his superiors to find a quick resolution, Reve reflects on the lives, beliefs, and superstitions of his parishioners, and his compassionate and humorous observations become intelligent and beautiful meditations on religion and existence. Highly recommended.”
— Pierre Camy, Schuler Books (Grand Rapids), Grand Rapids, MI

An extraordinary new novel by Samantha Harvey--whose books have been nominated for the Man Booker Prize, the Women's Prize for Fiction (formerly the Orange Prize), and the Guardian First Book Award--The Western Wind is a riveting story of faith, guilt, and the freedom of confession.

It's 1491. In the small village of Oakham, its wealthiest and most industrious resident, Tom Newman, is swept away by the river during the early hours of Shrove Saturday. Was it murder, suicide, or an accident? Narrated from the perspective of local priest John Reve--patient shepherd to his wayward flock--a shadowy portrait of the community comes to light through its residents' tortured revelations. As some of their darkest secrets are revealed, the intrigue of the unexplained death ripples through the congregation. But will Reve, a man with secrets of his own, discover what happened to Newman? And what will happen if he can't?

Written with timeless eloquence, steeped in the spiritual traditions of the Middle Ages, and brimming with propulsive suspense, The Western Wind finds Samantha Harvey at the pinnacle of her outstanding novelistic power.

SAMANTHA HARVEY is the author of three novels, Dear Thief, All Is Song, and The Wilderness, which won the Betty Trask Prize. Her books have been shortlisted for the Orange Prize for Fiction, the Guardian First Book Award, and the James Tait Black Prize, as well as longlisted for the Man Booker Prize and the Baileys Women's Prize. She lives in Bath, UK, and teaches creative writing at Bath Spa University.