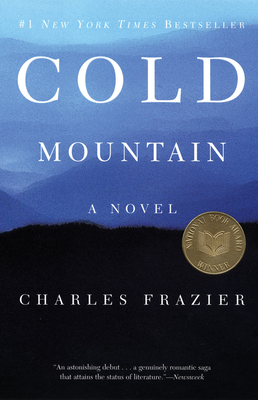 
Availability to be confirmed
In 1997, Charles Frazier's debut novel Cold Mountain made publishing history when it sailed to the top of The New York Times best-seller list for sixty-one weeks, won numerous literary awards, including the National Book Award, and went on to sell over three million copies. Now, the beloved American epic returns, reissued by Grove Press to coincide with the publication of Frazier's eagerly-anticipated second novel, Thirteen Moons. Sorely wounded and fatally disillusioned in the fighting at Petersburg, a Confederate soldier named Inman decides to walk back to his home in the Blue Ridge mountains to Ada, the woman he loves. His trek across the disintegrating South brings him into intimate and sometimes lethal converse with slaves and marauders, bounty hunters and witches, both helpful and malign. At the same time, the intrepid Ada is trying to revive her father's derelict farm and learning to survive in a world where the old certainties have been swept away. As it interweaves their stories, Cold Mountain asserts itself as an authentic odyssey, hugely powerful, majestically lovely, and keenly moving.

A Whitmanesque foray into America: into its hugeness, its freshness, its scope and its soul.” James Polk, The New York Times Book Review

An astonishing debut . . . a genuinely romantic saga that attains the status of literature.”Malcolm Jones, Newsweek

As close to a masterpiece as American writing is going to come these days.” Fred Chappell, Raleigh News & Observer

Charles Frazier’s feeling for the Southern landscape is reverential and beautifully composed. He has written an astonishing first novel.” Alfred Kazin, The New York Review of Books