The Greatest Game Ever Played: Harry Vardon, Francis Ouimet, and the Birth of Modern Golf (Paperback) 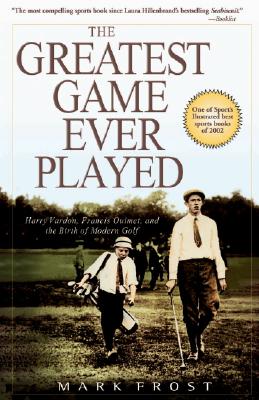 The Greatest Game Ever Played: Harry Vardon, Francis Ouimet, and the Birth of Modern Golf (Paperback)


On Our Shelves Now
THE GREATEST GAME EVER PLAYED is the story of Francis Ouimet and Harry Vardon, who in pursuit of their passion for a game that captivated them as children, broke down rigid social barriers that made their sport accessible to everyone on both sides of the Atlantic and beyond, positioning golf as one of the most widely played games in the world. Ouimet and Vardon were two men from different generations and vastly different corners of the world whose lives, unbeknownst to them at the time, bore remarkable similarities, setting them on parallel paths that led with a kind of fated inevitability to their epic battle at Brookline years in the future. This collision resulted in the Ã«big bang' that gave rise to the sport of golf as we know it today.

For Mark Frost, Francis Ouimet and Harry Vardon represent everything that's right about sports in general and sportsmen in particular; gentlemen, champions, teachers, leaders, and each in their own quiet way, heroes. In THE GREATEST GAME EVER PLAYED, Frost attempts to create penetrating studies of both of these men, along with over dozens of the game's seminal figures, within the dramatic framework offered by the tournament when they finally met, one of the most thrilling sports events in history, the 1913 U.S. Open.

Mark Frost is the author of the critically acclaimed THE GREATEST GAME EVER PLAYED, THE GRAND SLAM, and the bestselling THE LIST of 7, THE 6 MESSIAHS, and BEFORE I WAKE. He received a Writer's Guild Award and an Emmy nomination for his work as executive story editor on the acclaimed television series Hill Street Blues, and was the co-creator and executive producer of the ABC television series Twin Peaks. He lives in Los Angeles and upstate New York.
"One of the best golf books ever written."

"Anyone who loves golf, history, or just a great story will relish this wonderful book."

"The most compelling sports book since Seabiscuit."

"Stirring Frost tells this story at the perfect pitch."