Farthest North: A History of the North Polar Exploration in Eyewitness Accounts (Paperback) 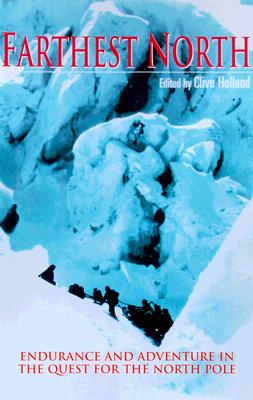 Farthest North: A History of the North Polar Exploration in Eyewitness Accounts (Paperback)

"A few toes aren't much to give to achieve the Pole," observed Robert Peary, but as Clive Holland's gripping history of traveling across the polar ice cap shows, much more was at risk for the men who went as far north as possible.
In addition to Peary's crowning triumph at the North Pole, there is the fourteen-year-old Horatio Nelson battling polar bears, the sinking of the Jeannette on De Long's push farthest north, Fridtjof Nansen's astonishing survival for two years in the Arctic, and the ill-fated dirigible expedition of the Italia. These stories and others are told in the explorers' own words, in all their direct and moving plainness, as they endure extremes of physical hardship and contend with each other in grim competition to reach the Pole first.
Noted Arctic expert Clive Holland compiles and blends together the narratives of the famous explorers Nansen, Peary, Franklin, De Long, Nordenskjold, and many others into one unfolding historical drama. Farthest North is an enthralling story spanning four hundred years and embracing many different motives, many different modes of travel, and many remarkable men - all risking their lives for a geographic point 500 miles from the nearest land.
"Spellbinding . . . interested readers will find this book hard to put down." - Publishers Weekly