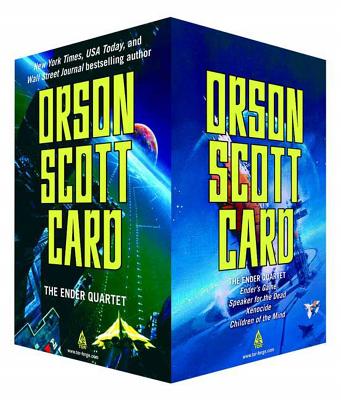 This boxed set contains Orson Scott Card's Ender's Game, Speaker for the Dead, Xenocide, and Children of the Mind. Winner of the Hugo and Nebula Awards

In order to develop a secure defense against a hostile alien race's next attack, government agencies breed child geniuses and train them as soldiers. A brilliant young boy, Andrew "Ender" Wiggin lives with his kind but distant parents, his sadistic brother Peter, and the person he loves more than anyone else, his sister Valentine. Peter and Valentine were candidates for the soldier-training program but didn't make the cut—young Ender is the Wiggin drafted to the orbiting Battle School for rigorous military training.

Speaker for the Dead

In the aftermath of his terrible war, Ender Wiggin disappeared, and a powerful voice arose: The Speaker for the Dead, who told the true story of the Bugger War.

Now, long years later, a second alien race has been discovered, but again the aliens' ways are strange and frightening...again, humans die. And it is only the Speaker for the Dead, who is also Ender Wiggin the Xenocide, who has the courage to confront the mystery...and the truth.

The war for survival of the planet Lusitania will be fought in the hearts of a child named Gloriously Bright.

On Lusitania, Ender found a world where humans and Pequeninos and the Hive Queen could all live together; where three very different intelligent species could find common ground at last. Or so he thought.

Children of the Mind

The planet Lusitania is home to three sentient species: the Pequeninos; a large colony of humans; and the Hive Queen, brought there by Ender. But once against the human race has grown fearful; the Starways Congress has gathered a fleet to destroy Lusitania.

Orson Scott Card is best known for his science fiction novel Ender's Game and its many sequels that expand the Ender Universe into the far future and the near past. Those books are organized into the Ender Saga, which chronicles the life of Ender Wiggin; the Shadow Series, which follows on the novel Ender's Shadow and is set on Earth; and the Formic Wars series, written with co-author Aaron Johnston, which tells of the terrible first contact between humans and the alien "Buggers." Card has been a working writer since the 1970s. Beginning with dozens of plays and musical comedies produced in the 1960s and 70s, Card's first published fiction appeared in 1977--the short story "Gert Fram" in the July issue of The Ensign, and the novelette version of "Ender's Game" in the August issue of Analog. The novel-length version of Ender's Game, published in 1984 and continuously in print since then, became the basis of the 2013 film, starring Asa Butterfield, Harrison Ford, Ben Kingsley, Hailee Steinfeld, Viola Davis, and Abigail Breslin.

“Card's prose is powerful here, as is his consideration of mystical and quasi-religious themes. Though billed as the final Ender novel, this story leaves enough mysteries unexplored to justify another entry; and Card fans should find that possibility, like this novel, very welcome indeed.” —Publishers Weekly (starred review) on Children of the Mind

“Orson Scott Card made a strong case for being the best writer science fiction has to offer.” —The Houston Post on Xenocide

“There aren't too many recent sf novels we can confidently call truly moral works, but Speaker for the Dead is one. It's a completely gripping story.” —The Toronto Star

“This is Card at the height of his very considerable powers--a major SF novel by any reasonable standard.” —Booklist on Ender’s Game