For Want of a Gun: The Sherman Tank Scandal of WWII (Hardcover) 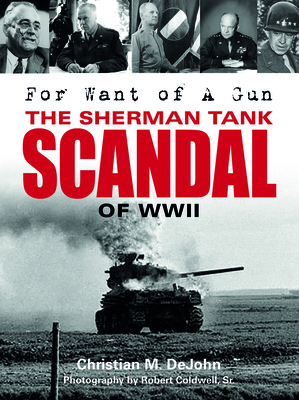 This remarkable story exposes the Sherman tank scandal of World War II, involving some of the biggest American names and stretching from the White House and Pentagon to factories and battlefronts. Outgunned by more powerful German opponents, the inferiority of American tanks led to some of the worst setbacks of the war, prolonging it in Europe. US tankers ultimately prevailed, but over 60,000 armored division soldiers were killed and wounded; their preventable sacrifice inspired the Hollywood movie Fury. Included are striking images of the Sherman's adversaries (photographed exclusively at the National Museum of Cavalry and Armor), along with original equipment, documents, period propaganda, and vintage photos of Sherman tanks in action. As a German officer noted, I was on this hill with six 88mm antitank guns...Every time they sent a tank, we knocked it out. Finally we ran out of ammunition, and the Americans didn't run out of tanks.

Christian DeJohn, a published historian completing a masters degree in military and American history, is a former United States cavalry tanker with hands-on experiences as a gunner in an M1 Abrams tank.