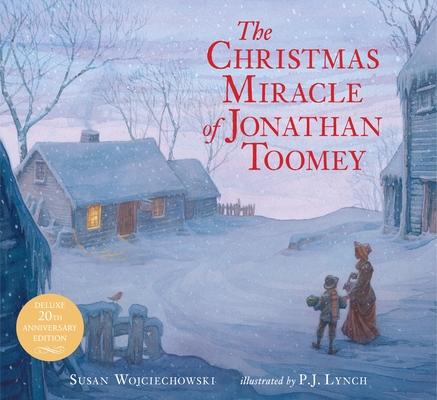 
Backordered
“The tale is unfolded with such mastery, humor, and emotional force that we are entirely within its power.” —The New York Times Book Review

Jonathan Toomey is the best woodcarver in the valley, but he is always alone and never smiles. No one knows about the mementos of his lost wife and child that he keeps in an unopened drawer. But one early winter’s day, a widow and her young son approach him with a gentle request that leads to a joyful miracle. The moving, lyrical tale, gloriously illustrated by P.J. Lynch, has been widely hailed as a true Christmas classic. This beautiful anniversary edition includes a new note from the author and an audio narration by James Earl Jones available as a complimentary download.
Susan Wojciechowski, a former children’s librarian, is the author of numerous books for children, including a series of books about Beany, a lovable worrywart. She lives in York, Pennsylvania.

P.J. Lynch, one of today’s most revered illustrators, has won many awards, including the Kate Greenaway Medal twice—for The Christmas Miracle of Jonathan Toomey and When Jessie Came Across the Sea. He is also the illustrator of A Christmas Carol and The Boy Who Fell Off the Mayflower, or John Howland's Good Fortune. He lives in Dublin.