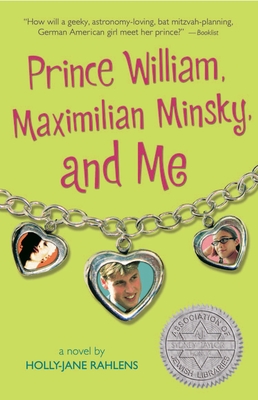 "Nelly’s voice rings true as she deals with friends, family, love, and religion. . . . This fast-paced work will grab readers from the start." — School Library Journal

Nelly Sue Edelmeister knows exactly who she is: a skinny, brainy thirteen-year-old Berlin schoolgirl. But that’s before she develops a hopeless crush on a certain British royal. And it’s definitely before she meets the oddly attractive Maximilian Minsky, her last hope for making the basketball team before it heads off to England and she is virtually thrown into Prince William’s arms. Meanwhile, her parents’ bickering is stressing her out, as is her bat mitzvah looming ahead. Readers will relate to this funny, heartfelt tale of a determined teen as she makes some surprising discoveries about life, loss, love, and faith.

HOLLY-JANE RAHLENS was born in Queens, New York, and graduated from Queens College. She then left for Berlin, where she has lived all of her adult life. While remaining an American citizen, she has flourished in the German media world, working in radio, television, and film as an actress, producer and commentator and creating a series of highly praised one-woman shows. Written in English, PRINCE WILLIAM, MAXIMILIAN MINSKY, AND ME was translated into German and earned the prestigious 2003 Duetscher Jugendliteraturpreis as the best young adult novel published in Germany. Holly-Jane Rahlens has since adapted the book into a screenplay, which is scheduled to go into production in the summer of 2005. She says, "I wrote this book to remind myself and all my readers that life is not simply black and white. In other words, the smartest girl in the class can actually sometimes be the dumbest. An 'enfant terrible' can turn out to be Prince Charming. We can put our faith in the laws of science yet still embrace our religious roots. And even a city with a dark past like Berlin can, indeed, become a haven of light." Holly-Jane Rahlens lives in Berlin with her husband and their nine-year-old son, Noah.