Bob Dylan All the Songs: The Story Behind Every Track Expanded Edition (Hardcover) 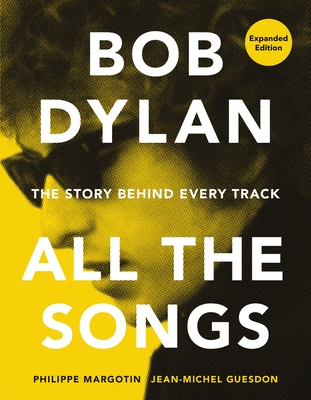 Bob Dylan All the Songs: The Story Behind Every Track Expanded Edition (Hardcover)


On Our Shelves Now
An updated edition of the most comprehensive account of Bob Dylan's Nobel Prize-winning work yet published, with the full story of every recording session, every album, and every single released during his nearly 60-year career.

Bob Dylan: All the Songs focuses on Dylan's creative process and his organic, unencumbered style of recording. It is the only book to tell the stories, many unfamiliar even to his most fervent fans, behind the more than 500 songs he has released over the span of his career. Organized chronologically by album, and updated to include all of his most recent work including the 2020 release of his 39th album, Rough and Rowdy Ways, Margotin and Guesdon detail the origins of his melodies and lyrics, his process in the recording studio, the instruments he used, and the contribution of a myriad of musicians and producers to his canon.
Philippe Margotin has written numerous books on music, including biographies of U2 and Radiohead, as well as All the Songs: The Story Behind Every Beatles Release and The Rolling Stones All the Songs: The Story Behind Every Track. He lives in Paris.