The Position: A Novel (Paperback) 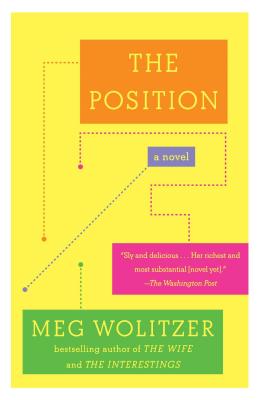 The Position: A Novel (Paperback)


Special Order - Usually Arrives in 1-5 Days
From the bestselling author of The Wife—Meg Wolitzer’s “hilariously moving, sharply written novel” (USA TODAY), hailed by critics and loved by readers worldwide, with its “dead-on observations about sex, marriage, and the family ties that strangle and bind” (Cleveland Plain Dealer).

Crackling with intelligence and humor, The Position is the masterful story of one extraordinary family at the hilarious height of the sexual revolution—and through the thirty-year hangover that followed.

In 1975, Paul and Roz Mellow write a bestselling Joy of Sex-type book that mortifies their four school-aged children and ultimately changes the shape of the family forever. Thirty years later, as the now dispersed family members argue over whether to reissue the book, we follow the complicated lives of each of the grown children and their conflicts in love, work, marriage, parenting, and, of course, sex—all shadowed by the indelible specter of their highly sexualized parents. Insightful, panoramic, and compulsively readable, The Position is an American original.
Meg Wolitzer’s novels include The Female Persuasion; Sleepwalking; This Is Your Life; Surrender, Dorothy; and The Position. She lives in New York City.
"Sly and delicious . . . Her richest and most substantial [novel yet]." -- The Washington Post

"[In this] novel of sexual politics and family farce . . . Wolitzer's comic timing never wavers, and she has an astute grasp of the way one generation's liberation inspires the next generation's pity." -- The New Yorker

"You know families are this funny, you know they are this weird. But never has this realization been such a welcome and entertaining relief." -- The Philadelphia Inquirer

"Hilariously moving, sharply written . . . The Position will resonate with anyone who has ever walked in on their parents doing the deed -- and for all of us who have had to accept that our mothers and fathers are normal people with healthy sex drives." -- USA Today