Half in Love: Stories (Paperback) 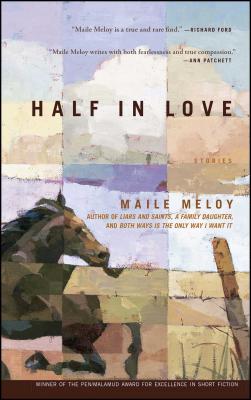 Half in Love: Stories (Paperback)

Lean and controlled in their narration, abundant and moving in their effects, Maile Meloy’s stories introduce a striking talent. Most are set in the modern American West, made vivid and unexpected in Meloy’s unsentimental vision; others take us to Paris, wartime London, and Greece, with the same remarkable skill and intuition.

In “Four Lean Hounds, ca. 1976,” two couples face a complicated grief when one of the four dies. In “Ranch Girl,” the college-bound daughter of a ranch foreman must choose which adult world she wants to occupy. In “A Stakes Horse,” a woman confronts risk and loss at the racetrack and at home. And in “Aqua Boulevard”—winner of the 2001 Aga Khan Prize for Fiction—an elderly Parisian confronts his mortality. Meloy’s command of her characters’ voices is breathtaking; their fears and desires are deftly illuminated. Smart, surprising, and evocative, Meloy’s brilliantly observed stories fully engage the mind and heart.
Maile Meloy is the author of the story collection Half in Love and the novel Liars and Saints, which was shortlisted for the 2005 Orange Prize. Meloy's stories have been published in The New Yorker, and she has received The Paris Review's Aga Khan Prize for Fiction, the PEN/Malamud Award, the Rosenthal Foundation Award, and a Guggenheim Fellowship. She lives in California.
"A sparkling debut."
— The New York Times

"There are times when a writer nails a story the way a diver nails a dive....Half in Love offers up both plain speaking and mystery,subtlety and shock. That hole in the water marks where the final plunge of a story took your heart along with it."
— The New York Times Book Review

"Tremendously beautiful. A writer not of promise, but with a fully realized gift."
— San Diego Union-Tribune

"She’s like Annie Proulx... She writes good stories in a very simple, pared-down style with a real sense of life and human beings in a beautifully simple landscape.”
— Helen Fielding