Them: Adventures with Extremists (Paperback) 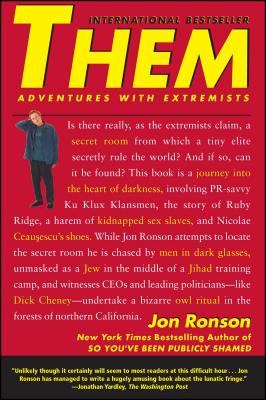 Them: Adventures with Extremists (Paperback)


Special Order - Usually Arrives in 1-5 Days
From the bestselling author of The Psychopath Test: A Journey Through the Madness Industry and So You’ve Been Publicly Shamed.

A wide variety of extremist groups -- Islamic fundamentalists, neo-Nazis -- share the oddly similar belief that a tiny shadowy elite rule the world from a secret room. In Them, journalist Jon Ronson has joined the extremists to track down the fabled secret room.

As a journalist and a Jew, Ronson was often considered one of "Them" but he had no idea if their meetings actually took place. Was he just not invited? Them takes us across three continents and into the secret room. Along the way he meets Omar Bakri Mohammed, considered one of the most dangerous men in Great Britain, PR-savvy Ku Klux Klan Grand Wizard Thom Robb, and the survivors of Ruby Ridge. He is chased by men in dark glasses and unmasked as a Jew in the middle of a Jihad training camp. In the forests of northern California he even witnesses CEOs and leading politicians -- like Dick Cheney and George Bush -- undertake a bizarre owl ritual.

Ronson's investigations, by turns creepy and comical, reveal some alarming things about the looking-glass world of "us" and "them." Them is a deep and fascinating look at the lives and minds of extremists. Are the extremists onto something? Or is Jon Ronson becoming one of them?
Jon Ronson is a documentary filmmaker and the author of Them: Adventures with Extremists. He lives in London.
Jonathan Yardley The Washington Post Unlikely though it certainly will seem to most readers at this difficult hour...Jon Ronson has managed to write a hugely amusing book about the lunatic fringe.

Ron Rosenbaum The New York Times Book Review Often entertaining, more often disturbing...[Ronson] has gotten closer to these people than any journalist I can think of.

The Boston Globe A tremendous and discomfiting achievement.

The Nation I've never read such a delightful book on such a serious and important topic.