At Home: A Short History of Private Life (CD-Audio) 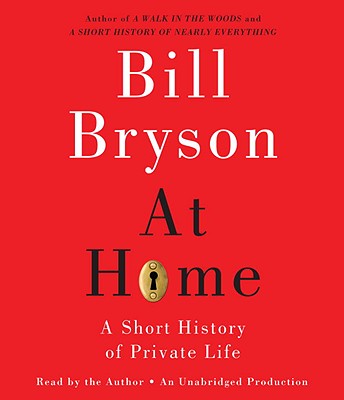 By Bill Bryson, Bill Bryson (Read by)
$45.00
Availability to be confirmed

“This literary horn-of-plenty is brimming with an astonishing amount of information, all related with Bryson's trademark clarity and humor. To read this is to embark on a wonderfully meandering journey through history, sociology, science, and more. The thread that connects it all is Bryson's own house. He guides us through his home, a charming former church rectory in a small English village. His kitchen, for example, inspires writing on the rise of tea as a favored beverage, the huge portions consumed by Victorian diners, the grueling work expected of servants, and even the use of imported ice as a food preservative. Enjoy the tour!”
— Christopher Rose, Andover Bookstore, Andover, MA

“Using his own home, an 1851 rectory in England, as a jumping off point, Bryson focuses his immense curiosity and incomparable writing skills on every aspect of 'home' to explore the history of why we live where we do and how we live. He takes us from room to room in this dynamic survey. You'll immediately want to share this with someone else. It's an 'Oh, let me read you just one more thing!' kind of book.”
— Banna Rubinow, The River's End Bookstore, Oswego, NY

From one of the most beloved authors of our  time—more than six million copies of his books have been sold in this country alone—a fascinating excursion into the history behind the place we call home.

“Houses aren’t refuges from history. They are where history ends up.”

Bill Bryson and his family live in a Victorian parsonage in a part of England where nothing of any great significance has happened since the Romans decamped. Yet one day, he began to consider how very little he knew about the ordinary things of life as he found it in that comfortable home. To remedy this, he formed the idea of journeying about his house from room to room to “write a history of the world without leaving home.” The bathroom provides the occasion for a history of hygiene; the bedroom, sex, death, and sleep; the kitchen, nutrition and the spice trade; and so on, as Bryson shows how each has fig­ured in the evolution of private life. Whatever happens in the world, he demonstrates, ends up in our house, in the paint and the pipes and the pillows and every item of furniture.

Bill Bryson has one of the liveliest, most inquisitive minds on the planet, and he is a master at turning the seemingly isolated or mundane fact into an occasion for the most diverting exposi­tion imaginable. His wit and sheer prose fluency make At Home one of the most entertaining books ever written about private life.

BILL BRYSON’s books include A Walk in the Woods, I’m a Stranger Here Myself, In a Sunburned Country, Bryson’s Book of Troublesome Words, A Short History of Nearly Everything (which earned him the 2004 Aventis Prize), The Life and Times of the Thunderbolt Kid, and Bryson’s Dictionary for Writers and Editors. Bryson lives in England with his wife and children.

PRAISE FOR AT HOME: A Short History of Private Life:

"...a delightful stroll through the history of domestic life. Now living in a 19th-century church rectory in Norfolk, England, the author decided to learn about the ordinary things of life by exploring each room in his house.... In a sense, Bryson’s book is a history of “getting comfortable slowly".... Informative, readable and great fun."—Kirkus Reviews (starred)

"[D]elightful.... Considering our homes means a dash through history, politics, science, sex, and dozens of other fields.  If this book doesn't supply you with five years' worth of dinner conversation, you're not paying attention."—PEOPLE magazine

"Fascinating.... Join this ambiable tour guide as he wanders through his house, a former rectory built in 1851 in a tranquil English village.... [It] takes a very particular kind of thoughtfulness, as well as a bold temperament, to stuff all this research into a mattress that's supportive enough to loll about on while pondering the real subject of this book -- the development of the modern world....  Bryson is fascinated by everything, and his curiosity is infectious...[his] enthusiasm brightens any dull corner.... You'll be given a delightful smattering of information about everything but...the kitchen sink."— Dominique Browning, The New York Times Book Review