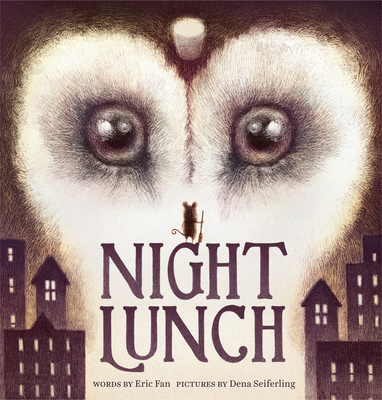 When the midnight lunch truck arrives, a mysterious cook whips up meals for busy owls while a hungry mouse looks on in this dreamlike picture book.

— Rae Ann
A delectable picture book about midnight snacks, nocturnal creatures and unexpected generosity, inspired by lunch carts that were the predecessors of today’s food trucks and diners. For fans of The Night Gardener.

Noses sniff the air as mouthwatering smells waft down city streets, luring growling bellies to the Night Owl. Inside this elegant, horse-drawn establishment, a feathery cook works the grill, serving up tasty dishes for shift-workers and operagoers alike: a mince pie for Fox, a ham sandwich for Badger and puddings for little Possums. Mouse, a poor street sweeper, watches as the line of customers swells, ever hopeful that someone will drop a morsel of food — but Owl’s cooking is far too delicious for more than a crumb to be found. As the evening’s service winds down, weary Owl spots trembling Mouse. Has he found his own night lunch, or will he invite this small sweeper inside for a midnight feast for two?

From the imagination of two acclaimed picture book creators, together for the first time, this dreamlike picture book is a magical ode to Victorian lunch wagons. Evoking the sounds, sights, smells and tastes of the city at night, Night Lunch reveals how empathy and kindness as well as dignity and gratitude can be found — and savored — in the most unexpected places.
ERIC FAN is one of the internationally renowned Fan Brothers whose picture books include The Barnabus Project, The Night Gardener and Ocean Meets Sky. Eric and Terry also illustrated the Chris Hadfield-penned picture book The Darkest Dark, Dashka Slater's The Antlered Ship and Beth Ferry's The Scarecrow. Recipients of the prestigious Sendak Fellowship, they have received a Governor General’s Literary Award and the Dilys Evans Founder’s Award from the Society of Illustrators, and were also shortlisted for the Kate Greenaway Medal among other honors.

DENA SEIFERLING is a highly acclaimed picture book author and illustrator and needle-felt artist who graduated with a B.F.A. and Visual Communications Degree from the Alberta University of the Arts, where she now works as an instructor. She is the illustrator of King Mouse, which was a finalist for the Governor General’s Literary Award, and its companion book Bear Wants to Sing. The Language of Flowers marked her exquisite debut as both author and illustrator.
A New York Times/New York Public Library Best Illustrated Children's Book of 2022
An Indigo Best Kids' Book of 2022
One of Chicago Public Library's Best Picture Books of 2022

"Spare, incantatory lines by Fan lay down a soothing rhythm for this nocturnal idyll . . . [a] memorable vision of a peaceable kingdom." —STARRED REVIEW, Publishers Weekly

"It’s difficult to create stories that plug directly into the looping logic of the minds of very young children that are also smart and engaging enough for adults in charge of bedtime reading. It’s equally difficult to create the kind of picture book that feels timeless, quiet, and subtle without losing the interest of children. . . . [Q]uietly engaging and carefully executed." —STARRED REVIEW, Quill & Quire

"Night Lunch does indeed capture the spooky-gauzy enchantment of the wee hours, but readers may leave the book less inclined to shut their eyes than to head to the kitchen. . . . Readers' own senses will be stirred by Seiferling's bewitching digital art." —STARRED REVIEW, Shelf Awareness

"Adults and children alike . . . will enjoy the subtle nuances of the book and the soft warmth of the characters. [A] good choice for a pajama storytime or bedtime tale . . . a tasty little treat." —Kirkus Reviews

"A hint of mischief animates this peaceful, harmonious alternative [to] noisier peeks at what animals really do at night . . . A pleaser for story time or bedtime, with distinctive art that adds quiet touches of humor and mystery." —School Library Journal

"[A] sweet and satisfying fantastical glimpse into what animals might be doing while humans sleep. . . . This creative and fun story should encourage children to imagine their own nighttime feasts." —Booklist

"[A]n expertly done book about compassion and care. Eric Fan’s spare text has a poetic, snappy quality that crackles and begs to be read aloud. . . . Together Seiferling and Fan create an unforgettable nocturnal experience, one that ultimately comforts and happily stays in the memory." —Mr. Brian's Picture Book Picks