The Fright Before Christmas: Ready-to-Read Level 3 (Bunnicula and Friends #5) (Paperback) 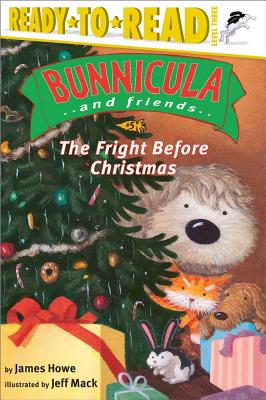 The Fright Before Christmas: Ready-to-Read Level 3 (Bunnicula and Friends #5) (Paperback)

This is book number 5 in the Bunnicula and Friends series.

It's Christmas Eve, and Howie the dachshund puppy is scared. Who is this big guy in the red suit who's going to come down the Monroes' chimney with a huge sack over his shoulder? Chester isn't scared of Santa; it's the Christmas ghosts he's worried about (and, of course, Bunnicula). So when there's a loud CRASH from the basement, he and Harold have to investigate -- to make sure the Monroes have a merry Christmas, not a scary Christmas.
James Howe is the author of more than ninety books for young readers. Bunnicula, coauthored by his late wife Deborah and published in 1979, is considered a modern classic of children’s literature. The author has written six highly popular sequels, along with the spinoff series Tales from the House of Bunnicula and Bunnicula and Friends. Among his other books are picture books such as Horace and Morris but Mostly Dolores and beginning reader series that include the Pinky and Rex and Houndsley and Catina books. He has also written for older readers. The Misfits, published in 2001, inspired the nationwide antibullying initiative No Name-Calling Week, as well as three sequels, Totally Joe, Addie on the Inside, and Also Known as Elvis. A common theme in James Howe’s books from preschool through teens is the acceptance of difference and being true to oneself. Visit him online at JamesHowe.com.