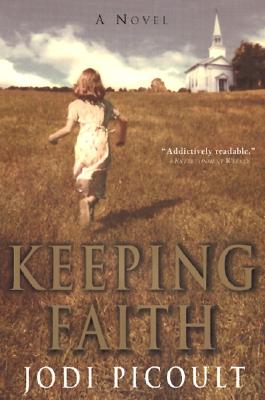 By Jodi Picoult
$13.95
Availability to be confirmed

For the second time in her marriage, Mariah White catches her husband with another woman, and Faith, their seven-year-old daughter, witnesses every painful minute. In the aftermath of a sudden divorce, Mariah struggles with depression and Faith begins to confide in an imaginary friend. At first, Mariah dismisses these exchanges as a child's imagination. But when Faith starts reciting passages from the Bible, develops stigmata, and begins to perform miraculous healings, Mariah wonders if her daughter--a girl with no religious background-might actually be seeing God. As word spreads and controversy flares, Mariah and Faith are besieged by believers and disbelievers alike, caught in a media circus that threatens what little stability they have left. Building inexorably to a climactic battle for custody, "Keeping Faith" explores a family plagued by the media, the medical profession, and organized religion in a world where everyone has an opinion but no one knows the truth. Fascinating, thoughtful, and suspenseful, this extraordinary novel is Jodi Picoult at her best: controversial and compelling.