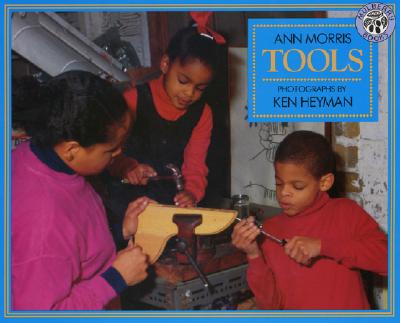 Do you use tools? Sure you do, anytime you eat with a spoon or drink with a straw or write with a pen! A French chef flipping crepes with her spatula; Salvadoran fishers mending nets with their marlinespikes; an American girl carving a jack-o'-lantern with a knife—in every country of the world, people of all ages use tools to make their lives easier.

As with all of the books in this classic series, a broad spectrum of men and women from around the world help make the information relevant and easily digestible.

Ann Morris's many books include Families, Bread Bread Bread, Hats Hats Hats, On the Go, and Loving. She lives in New York City.

As a children's book writer, Ann Morris has been able to successfully integrate her varied experiences in teaching young children, travel, writing, and editing. Having grown up in the polyglot public schools of New York City, where each child's ethnic heritage was revealed by his name or by the contents of the lunch box from home filled with sausages, egg rolls, matzos, or pizza, she developed a strong Interest In cultures other than her own. " I'm a gypsy by nature," she says. "I always have my suitcase packed."

She and photographer Ken Heyman once traveled across the United States to document the lives often different families. Both she and the teacher's pupils liked the snake charmer/teacher who taught class in a circus trailer with her favorite boa around her neck. Although Ms. Morris has never tried this stunt he herself, she has taught children in public and private schools in New York City, and adults at Bank Street College, Columbia Teachers College, New York University, and Queens College of the City University of New York. More recently she has been teaching writing for children at The New School.

Ann Morris left teaching to become editorial director of Scholastic's early childhood department. Now she devotes her professional time to writing and all her other time to 11 people watching, music in any and all Forms, cat care, cooking and eating, and travel." All of these experiences, she says, provide material for her books.

In Israel Ms. Morris was caught up in the enchantment of the place as well as the conflicts that are a consequence of its history. One of her books, When Will They Stop Fighting? (Atheneum), reflects her concern about children who have become the victims of these conflicts.

Ann Morris worked with photographer Ken Heyman while producing an award-winning series of sound-filmstrips for young children. Since then the author-photographer team has created several books in a multicultural series for Lothrop, including Hats, Hats, Hats; Shoes, Shoes, Shoes; and Bread, Bread, Bread. Her interest in travel and the arts brought her to the famous Vaganova, Academy, where children of the famous Kirov ballet company are instructed. This resulted in On Their Toes (Atheneum), followed by Dancing to America (Dutton), photographed by Paul Kolnik. The latter book is about one of the Russian children and his family who emigrated to New York, where he now participates in our own School of American Ballet. Her book Karate Boy (Dutton) features her nephew and his friends in karate class. She thinks of this as a "family book" in that it was photographed by her cousin, David Katzenstein. Light the Candle Bang the Drum (Dutton), with illustrations by Peter Linenthal, is about holidays around the world.

"Born in New York City in 1930, Ken Heyman first became interested in photography in high school. Later, during his student days at Columbia College--which were interrupted by a two-year stint in the army--his skill as a photographer grew, but he still regarded photography as no more than a hobby. Then two events in college helped to direct him toward his career in photography. First, he sent off selections of his work to two national photo-graphy annuals and was pleased, indeed surprised, when both indicated they were eager to print his pictures--and did.

"But perhaps more important was his becoming a student of the distinguished anthropologist Margaret Mead. To fulfill a term paper requirement in one of her courses, Mr. Heyman submitted a photographic essay that interested the famous professor. Out of this began a friendship and collaboration that continued for more than twenty years.

"Their first collaboration began shortly after his graduation from Columbia in 1956, when she invited him to go with her to take pictures in Bali. Other field trips followed: some with Mead and others where he went along. Since then, Ken Heyman has photographed in more than sixty countries. These photographs have appeared in major exhibits and in two books co-authored with Margaret Mead: Family (1965) and World Enough (1976).

"Ken Heyman has done photographic assign-ments for many magazines, including Life. He has worked for the U. S. Information Agency, photographing Alliance for Progress projects in Latin America, and for several photographic agencies, including Rapho Guillumette Agency and Magnum.

"Shows of Mr. Heyman’s work have been held at the Museum of Modern Art (1963), the Hallmark Gallery (1965), the Smithsonian Institution (1965), the International Center for Photography in New York City (1976), and the Zabriskie Gallery in Paris (1995). Ken Heyman’s work has brought him a number of awards, including “The World Understanding Award,” considered to be one of the top awards in photography. It is given “to honor the photo-grapher whose work has contributed most to a better understanding among the world’s people.”

"Ken Heyman has done many books in addition to Family and World Enough. His recent work includes ten books for children written by Ann Morris. The multicultural perspective in these acclaimed books reflects Heyman’s varied experience and his ability to sensitively interpret the human condition."

"The author's point—tools are universal—is well taken. Heyman's photographs take readers literally on a trip around the world."
— Booklist