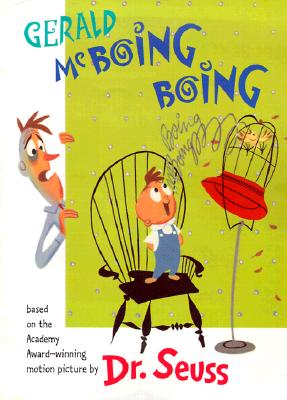 By Dr Seuss, Mel Crawford (Illustrator)
$12.95
Availability to be confirmed

In 1950, Theodor Geisel—known to the world even then as Dr. Seuss—met up with a friend who worked for a new animation studio called United Productions of America. "UPA has a fresh outlook," the friend said. Could Seuss write something new and different for them? Something that had a little more going for it than the usual cats chasing mice? "Just suppose," Seuss came back, "there was a little kid who didn't speak words but only weird sounds?" And that's how Gerald McBoing Boing came into being. Brought to life by UPA as an animated cartoon, it attracted legions of fans, rave reviews, and went on to win an Academy Award® in 1951. Available in book form only briefly at the time of the movie's release, here it is again—unique, delectable, vintage Seuss.

Dr. Seuss was born Theodor Geisel in Springfield, Massachusetts on March 2, 1904.  After attending Dartmouth College and Oxford University, he began a career in advertising.  His advertising cartoons, featuring Quick, Henry, the Flit!,  appeared in several leading American magazines.  Dr. Seuss's first children's book, And To Think That I Saw It On Mulberry Street, hit the market in 1937, and the world of children's literature was changed forever!  In 1957, Seuss's The Cat in the Hat became the prototype for one of Random House's best-selling series, Beginner Books.  This popular series combined engaging stories with outrageous illustrations and playful sounds to teach basic reading skills.  Brilliant, playful, and always respectful of children, Dr. Seuss charmed his way into the consciousness of four generations of youngsters and parents.  In the process, he helped kids learn to read.

Winner of the Pulitzer Prize in 1984 and three Academy Awards, Seuss was the author and illustrator of 44 children's books, some of which have been made into audiocassettes, animated television specials, and videos for children of all ages.  Even after his death in 1991, Dr. Seuss continues to be the best-selling author of children's books in the world.