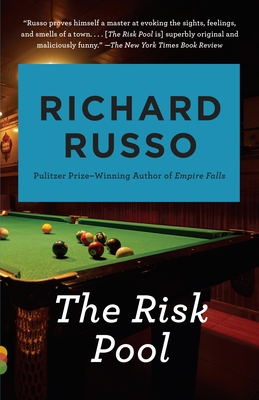 
Availability to be confirmed
A wonderfully funny, perceptive novel The Risk Pool is set in Mohawk, New York, where Ned Hall is doing his best to grow up, even though neither of his estranged parents can properly be called adult.

His father, Sam, cultivates bad habits so assiduously that he is stuck at the bottom of his auto insurance risk pool. His mother, Jenny, is slowly going crazy from resentment at a husband who refuses either to stay or to stay away. As Ned veers between allegiances to these grossly inadequate role models, Richard Russo gives us a book that overflows with outsized characters and outlandish predicaments and whose vision of family is at once irreverent and unexpectedly moving.

"A fine, closely observed novel . . . Richard Russo writes with such sympathy and attention to the rhythms of small-town life that he invests inarticulate lives with genuine passion. . . . [He] has succeeded in creating characters with the emotional weight of people we've known in real life." --The New York Times

"Richard Russo has it just perfect in The Risk Pool. A gem of a novel." --St. Louis Post-Dispatch