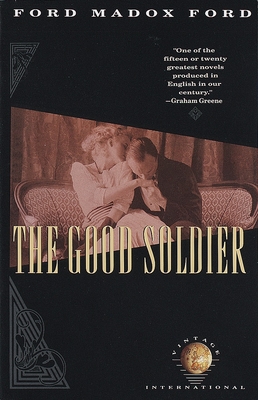 
Special Order - Usually Arrives in 1-5 Days
At the fashionable German spa town Bad Nauheim, two wealthy, fin de siecle couples -- one British, the other American -- meet for their yearly assignation. As their story moves back and forth in time between 1902 and 1914, the fragile surface propriety of the pre -- World War I society in which these four characters live is ruptured -- revealing deceit, hatred, infidelity, and betrayal. "The Good Soldier" is Edward Ashburnham, who, as an adherent to the moral code of the English upper class, is nonetheless consumed by a passion for women younger than his wife -- a stoic but fallible figure in what his American friend, John Dowell, calls "the saddest story I ever heard."
Ford Madox Ford was born Ford Hermann Hueffer in England in 1873. In 1919 he changed his name to Ford Madox Ford in honor of his grandfather, the Pre-Raphaelite painter Ford Madox Brown, whose biography he had written. Ford was well known for both his fiction and his criticism. He founded two influential journals, The English Review in 1908 and The Transatlantic Review in 1924, in which he championed many of the leading modernist writers of the day. His most famous novels include the tetralogy Parade’s End and The Good Soldier, which are still ranked among the greatest literary works of the twentieth century. Ford died in 1939, at the age of 65, in France.