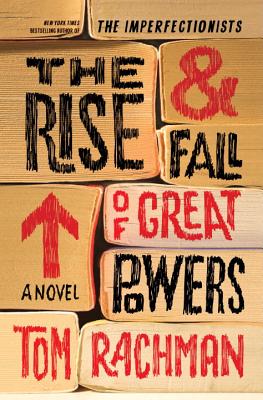 “Rachman has an uncanny ability to create well-developed and fully realized characters. His debut, The Imperfectionists, was an indie favorite, and I have no doubt that this follow-up will be just as popular. The Rise & Fall of Great Powers has a wonderful sense of time and place -- Bangkok in 1988, New York in 1999, and Wales in 2011 -- and a great cast of characters. On the last page, I felt lucky to have met these newfound friends but sad to say goodbye.”
— Shawn Donley, Powell's Books, Inc, Portland, OR

NAMED ONE OF THE BEST BOOKS OF THE YEAR BY
NPR "The Seattle Times The Globe and Mail Kirkus Reviews Daily Mail The Vancouver Sun"
For fans of Jennifer Egan, Dave Eggers, and Donna Tartt the brilliant, intricately woven new novel by Tom Rachman, author of "The Imperfectionists"
Following one of the most critically acclaimed fiction debuts in years, "New York Times" bestselling author Tom Rachman returns with a brilliant, intricately woven novel about a young woman who travels the world to make sense of her puzzling past.
Tooly Zylberberg, the American owner of an isolated bookshop in the Welsh countryside, conducts a life full of reading, but with few human beings. Books are safer than people, who might ask awkward questions about her life. She prefers never to mention the strange events of her youth, which mystify and worry her still.
Taken from home as a girl, Tooly found herself spirited away by a group of seductive outsiders, implicated in capers from Asia to Europe to the United States. But who were her abductors? Why did they take her? What did they really want? There was Humphrey, the curmudgeonly Russian with a passion for reading; there was the charming but tempestuous Sarah, who sowed chaos in her wake; and there was Venn, the charismatic leader whose worldview transformed Tooly forever. Until, quite suddenly, he disappeared.
Years later, Tooly believes she will never understand the true story of her own life. Then startling news arrives from a long-lost boyfriend in New York, raising old mysteries and propelling her on a quest around the world in search of answers.
Tom Rachman an author celebrated for humanity, humor, and wonderful characters has produced a stunning novel that reveals the tale not just of one woman but of the past quarter-century as well, from the end of the Cold War to the dominance of American empire to the digital revolution of today. Leaping between decades, and from Bangkok to Brooklyn, this is a breathtaking novel about long-buried secrets and how we must choose to make our own place in the world. It will confirm Rachman's reputation as one of the most exciting young writers we have.
Praise for "The Rise & Fall of Great Powers"
"
" Ingenious . . . Rachman needs only a few well-drawn characters to fill a large canvas and an impressive swath of history. Janet Maslin, "The New York Times"
A superb follow-up to 2010's "The Imperfectionists ." . . ambitious and engaging. "The Seattle Times"
Engaging and inventive . . . full of wonderfully quirky, deeply flawed, but lovable characters . . . On the spectrum of interesting literary childhoods, Tooly Zylberberg the protagonist of Tom Rachman's second novel would rank somewhere in the vicinity of Jane Eyre and Oliver Twist. "San Francisco Chronicle"
I found it impossible not to fall in love with shape-shifting Tooly. As an adult, she sports an ironical sense of humor and an attraction to dusty old books. As a child, her straight-faced mirth and wordplay are break-your-heart irresistible. Ron Charles, "The Washington Post"
A] read-it-all-in-one-weekend book. "The New Republic"
A compelling page-turner . . . intricate, sprawling, and almost Dickensian. "USA Today"
Rachman's comedic powers drive the story, with grace and wit. Minneapolis "Star Tribune.
Tom Rachman was born in London in 1974 and raised in Vancouver. He attended the University of Toronto and Columbia Journalism School, then worked as a journalist for the Associated Press in New York and Rome and for the "International Herald Tribune" in Paris. His first novel, "The Imperfectionists, " was an international bestseller, translated into twenty-five languages. He lives in London.

Advance praise for The Rise & Fall of Great Powers

“A suspenseful novel that whisks readers around the world . . . [a journey] worth taking.”—Publishers Weekly

“So good I had to read it twice simply to figure out how he pulled it off . . . The novel is alternately hilarious and heart-wrenching, and it’s assembled like a Rubik’s Cube.”—Christopher Buckley, The New York Times Book Review

“Marvelous . . . a rich, thrilling book . . . a splendid original, filled with wit and structured so ingeniously that figuring out where the author is headed is half the fun.”—Janet Maslin, The New York Times

“Each chapter is so finely wrought that it could stand alone as a memorable short story. Slowly, the separate strands become entwined. . . . Funny, poignant, occasionally breathtaking.”—Financial Times

“[A] beguiling first novel . . . Rachman is a fine observer and a funny writer—and a writer who knows how to be funny in character.”—The Washington Post