Squids Will Be Squids: Fresh Morals for Beastly Fables (Hardcover) 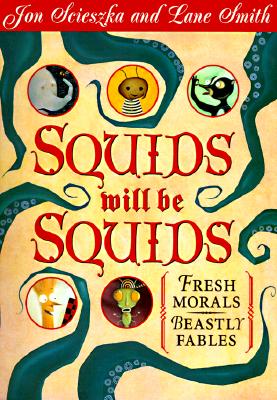 A FableThere once was an Eagle and a Lion who had worked together on a lot of books. They did The True Story of the 3 Little Pigs , The Stinky Cheese Man, and Math Curse.?Everyone is waiting for Science Curse, ? said their editor, Queen Bee.?Okay, ? said Eagle Scieszka and Lion Smith. ?So why don't we make a book of weird fables with strange morals and call is Squids Will Be Squids?And they did.MORAL: With these guys, you just never know.Fables have been around for a very long time. Aesop was famous for telling them, although he wasn't the first?or the best-looking. Now from the incomparable team who stood fairy tales on their heads with The Stinky Cheese Man, come fables as you?ve never heard them before. There's the story of ?Little Walrus, ? who tells just a little too much of the truth, and the morality tale of the boastful ?Piece of Toast and Fruit Loops.? We read of Slug, so busy admiring herself that she doesn't see the steamroller behind her, and learn the wise lessons of ?Hand, Foot, and Tongue? (Moral: There are some things we don't talk about at the dinner table).In their inimitable style, Jon Scieszka and Lane Smith have created contemporary fables that reflect all the bossiness, sneakiness, bragging and silliness of our everyday lives. Of course, these tales are handled with such tact and sensitivity that we would never recognize a person like ourselves in them?would we?Jon Scieszka and Lane Smith are an enormously popular and highly acclaimed author and illustrator team. Mr. Scieszka perfected his keen ear for juvenile humor as an elementary school teacher. He now writes full time. Mr. Smith is a filmmaker as well as a writer and illustrator. He recently designed the characters for the film version of Roald Dahl's James and the Giant Peach. Jon Scieszka lives in Brooklyn, New York. Lane Smith lives in New York City.

Multiple award-winning author Jon Scieszka grew up in Flint, Michigan, the second oldest and the nicest of six boys. Jon went to school at Culver Military Academy in Indiana where he was a Lieutenant; Albion College in Michigan where he studied to be a doctor; and Columbia University in New York, where he received an M.F.A. in fiction. He taught elementary school in New York for ten years in a variety of positions. He is the author of many books for children including theNew York TimesBest Illustrated BookThe Stinky Cheese Man and Other Fairly Stupid Tales(illustrated by Lane Smith), the Caldecott Honor bookThe True Story of the Three Little Pigs(illustrated by Lane Smith), andMath Curse(illustrated by Lane Smith). In addition to his work as an author, Jon also runs a web-based literacy program called Guys Read that is designed to encourage boys, particularly reluctant readers, to get involved with books. In 2008, Jon was named the country s first National Ambassador for Young People s Literature, a joint effort of the Library of Congress and the Children s Book Council. During his two-year role as Ambassador, he acted as a spokesperson for children s literature, speaking to groups of parents, teachers, and children to encourage the importance of reading. You can visit Jon online at www.jsworldwide.com."