My Brother's Bicycle: Enfield to Athens on a Tandem (Paperback) 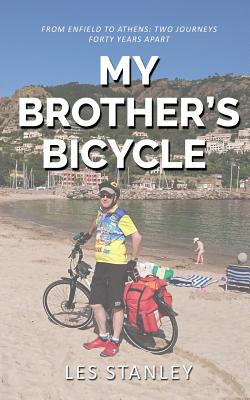 By Leslie Stanley
$9.99
Usually Ships in 1-5 Days
This book cannot be returned

This book describes a journey of contemplation and misadventure as I re-live a bicycle trip I first embarked on as a fresh faced 20 year old. It was more than 40 years ago that I originally mounted the tandem and headed south with a guy I had met at Liverpool Street station a few days earlier.

Rod Stewart was still on his third marriage. The channel tunnel was just a dream and only a few years had passed since Man first walked on the Moon.

For the re-run I was better prepared, or so I thought. An electric bike as opposed to a clunky old tandem with barely functioning gears, and, as you'll read in the book, limited braking capabilities. A GPS to guide me and help find accommodation. I even had a helmet and a trendy cycling shirt. I'd drawn the line at padded lycra shorts though. A far cry from the T-shirt, cut-off Levis, tattered maps and soggy campsites of my previous ride. And this time my wife was coming with me, not some guy called Alan from Enfield whom I had met through an ad in Time Out magazine. What could possibly go wrong?