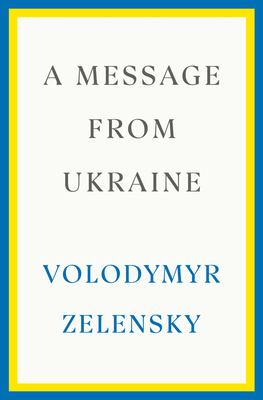 
On Our Shelves Now
An urgent call to arms from Time’s Person of the Year, the Ukrainian leader whose unwavering courage in the face of the Russian invasion has inspired the world and turned him overnight into a global beacon of democracy

The words of a man. The message of a people.

Bringing together a new introduction by Volodymyr Zelensky with his most powerful war speeches, this book recounts Ukraine’s story through the words of its president.

Above all, it is a battle cry for us all to stand up and fight for liberty. If not now, when?

The only book officially authorized by President Zelensky, A Message from Ukraine includes speeches he has personally selected to tell the story of the Ukrainian people.
Volodymyr Zelensky is the president of Ukraine. In 2022, he was named Time’s Person of the Year. Elected in 2019, he has been leading Ukraine’s resistance to the full-scale Russian invasion since February 2022.
“The Ukraine president’s storytelling skills and sense of moral purpose elevate his war speeches in this compelling collection.”—The Guardian

“[Zelensky’s] speeches have been compared to Winston Churchill’s. Now his messages—of hope, defiance, bravery, anger—have been collected into a remarkable book.”—The Times Magazine

“A collection of speeches by the Ukrainian leader is genial, witty, personable, scathing—and full of punchy one-liners.”—The Telegraph

“Displays the president’s firm grasp on the emotions of his audience [and] showcases Mr Zelensky’s well-chosen historical references.”—The Economist