A Way Out of No Way: A Memoir of Truth, Transformation, and the New American Story (Hardcover) 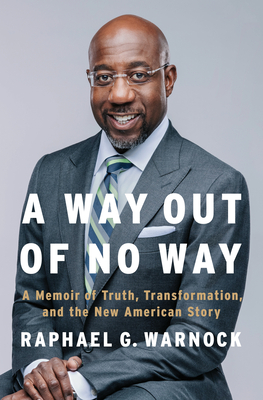 A Way Out of No Way: A Memoir of Truth, Transformation, and the New American Story (Hardcover)


On Our Shelves Now
On the heels of his historic election to the United States Senate, Raphael G. Warnock shares his remarkable spiritual and personal journey.

“Sparkling… a narrative of an extraordinary life, from impoverished beginnings in Savannah to his arrival on Capitol Hill. Along the way, he reflects with considerable candor and insight on the meaning and importance of faith, truth-telling and political and social redemption.”—The New York Times Book Review

Senator Reverend Raphael G. Warnock occupies a singular place in American life. As senior pastor of Atlanta’s Ebenezer Baptist Church, and now as a senator from Georgia, he is the rare voice who can call out the uncomfortable truths that shape contemporary American life and, at a time of division, summon us all to a higher moral ground.

Senator Warnock grew up in the Kayton Homes housing projects in Savannah, the eleventh of twelve children. His dad was a World War II veteran, and as a teenager his mom picked tobacco and cotton in rural Georgia. Both were Pentecostal preachers. After graduating from Morehouse College, Dr. Martin Luther King Jr.’s alma mater, Senator Warnock studied for a decade at Union Theological Seminary while serving at Harlem’s Abyssinian Baptist Church. At thirty-five, he became the senior pastor at Ebenezer, where Dr. King had preached and served.

A powerful preacher and a leading voice for voting rights and democracy, Senator Warnock has a once-in-a-generation gift to inspire and lead us forward. A Way Out of No Way tells his remarkable story for the first time.
Senator Reverend Raphael G. Warnock serves as the senior pastor of the historic Ebenezer Baptist Church of Atlanta. He also has served at the Sixth Avenue Baptist Church of Birmingham, the Abyssinian Baptist Church of Harlem, and the Douglas Memorial Community Church of Baltimore. Senator Warnock holds degrees from Morehouse College and Union Theological Seminary. He is a member of Alpha Phi Alpha Fraternity, Inc., a lifetime member of the NAACP, and the former chairman of the board of the New Georgia Project. He is the author of The Divided Mind of the Black Church and the picture book Put Your Shoes On & Get Ready!, illustrated by Temika Grooms. In January 2021, Warnock became Georgia’s first Black senator.
“Sparkling . . . In nine engrossing chapters, Warnock offers a narrative of an extraordinary life, from impoverished beginnings in Savannah to his arrival on Capitol Hill. Along the way, he reflects with considerable candor and insight on the meaning and importance of faith, truth-telling and political and social redemption.” —Raymond Arsenault, The New York Times Book Review

“Raphael Warnock’s inspiring memoir arrives just in time to remind us that even in our darkest days, America offers at least as much hope as despair.” —Charles Kaiser, The Guardian

“Warnock’s story is indeed the new American story. Only this time, Horatio Alger hails from the projects . . . reads like a Who’s Who of Black America . . . riveting.” —Tammy Joyner, The Washington Post

“Full of tales about Warnock’s upbringing in a public housing project with 11 siblings and two doting parents, and the go-getter gumption it took to rise to one of the nation’s most important pulpits.” —Greg Bluestein, The Atlanta Journal-Constitution

“A compelling, insightful memoir that details an extraordinary journey. A remarkable preacher—now politician, who uncharacteristically chooses to take his famous Atlanta pulpit with him to Washington.” —Bryan Stevenson, author of Just Mercy

“In A Way Out of No Way, U.S. senator Raphael Warnock—at once pastor and public servant—demonstrates why he is one of our nation’s most dynamic moral leaders. The lived experiences highlighted in the book show an acute awareness of the pain and promise written into America’s story. Senator Warnock’s writing simultaneously challenges Americans reckoning with the complexity of our nation's story and binds us together to deliver a better future. This work is intended for all who believe, as I do, that we have an extraordinary opportunity to transform the future of our nation, not despite our challenges but because of them.” —Stacey Abrams, politician and author of Our Time Is Now

“Senator Rev. Raphael Warnock lives his life with a sense of mission guided by his faith. As a preacher standing in the legacy of the King family at Ebenezer Baptist Church and as a United States senator, Raphael Warnock is helping build a better Georgia and America. Warnock’s life is a sermon that we get to witness in his remarkable book, A Way Out of No Way.” —President Jimmy Carter

“Raphael Warnock is a tireless advocate for justice and a true inspiration for countless people, including me. Whatever hope exists for our democracy is traceable to everyday heroes, like Warnock, who are guided by a powerful moral compass and who refuse to surrender to the forces of injustice no matter how long the odds.” —Michelle Alexander, author of The New Jim Crow

“Senator Warnock has given us insight into the journey that led him to the doorsteps of history. From the housing projects of Savannah, Georgia, to the senate chamber, his is a story of love, courage, and abiding faith—of a man who has grown into the crown Morehouse College placed above his head. A Way Out of No Way is a powerful sermon from beginning to end. Read it as a prophetic witness and as the story of a pastor who now walks the corridors of power to speak truth and to act on behalf of the least of these.” —Eddie S. Glaude Jr., author of Begin Again

“This book is a harbinger of hope in what sometimes seems like hopeless times. Whether you know him as Senator Warnock or Pastor Warnock, his is a remarkable journey that will touch, enlighten, and inspire you. From Morehouse College to ‘America’s Freedom Church,’ from the loving womb of parents who were Pentecostal pastors to the pinnacle of political power in the U.S. Senate, this story will help us rediscover that in the way of justice, the way of courage, the way of love, there is a way out of no way.” —The Most Rev. Michael B. Curry, presiding bishop of The Episcopal Church and author of Love Is the Way and The Power of Love

“Raphael Warnock was nurtured in the cultural space between Booker T. Washington’s Up From Slavery and Mr. Smith Goes to Washington—and he is the theological child of both Martin Luther King and James Cone. As a prophet, Rev. Warnock has uplifted congratulations with his mighty words. As a politician, Senator Warnock has enthralled the masses with his mighty deeds. A Way Out of No Way brilliantly captures the life and upbringing of one of the most unique and inspiring figures in American life over the last half century. Before he blazed a path to Washington, Reverend Senator Warnock charted a course worthy of history books in the quiet dignity of Black sacrifice and struggle, rising from poverty to one of the nation’s foremost pulpits, and now, the Senate floor. This is Black Bildungsroman meets the American hunger for justice, and what a majestic story it is.” —Michael Eric Dyson, author of Long Time Coming

“The separation of church and state does not require the segregation of moral values from public life, as Raphael Warnock’s prophetic pilgrimage in this remarkable book dramatically testifies. This mentee of MLK and John Lewis is not a former pastor and  activist but remains powerfully both, and who now just happens to also be a United States senator. Warnock’s extraordinary book shows us the way forward to a multiracial democracy in America filled with the children of God.” —Jim Wallis, inaugural chair of Faith and Justice at McCourt School of Public Policy, founding director of the Georgetown University Center on Faith and Justice, and author of America’s Original Sin