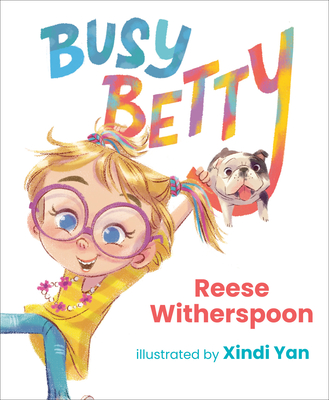 
On Our Shelves Now
From Academy Award–winning actress, founder, and bestselling author, Reese Witherspoon, comes Busy Betty, a story about a creative, curious, and exuberant young girl who has big plans and an even bigger heart.

Busy Betty has always been busy . . . even when she was just a baby!

When Betty gives Frank a big hug, she realizes he needs a bath, PRONTO! Her best friend, Mae, is coming over, and Betty can’t have the smelliest dog in the whole world! But giving Frank a bath is harder than she thought and just when everything seems impossible, with Mae’s help, Betty learns she can accomplish anything with perseverance, teamwork, and one great idea.

From Reese Witherspoon comes a smart and larger-than-life character who encourages young readers to celebrate what makes them unique and realize that anything is possible!

Praise for Busy Betty:
"A fun and high-spirited story for the fans of Fancy Nancy, Pinkalicious, or Freckleface Strawberry."--School Library Journal

"An earnest and unabashed celebration of youthful entrepreneurial zeal that feels very of the moment." --Publishers Weekly

"Extreme angles effectively convey a sense of perpetual motion. . . . Witherspoon’s rollicking text never holds back . . . . as Betty says, “Being busy is a great way to be.” Young readers are sure to agree."--Kirkus reviews
Reese Witherspoon is an award-winning actress, entrepreneur, producer, and New York Times bestselling author. She won an Academy Award® for her portrayal of June Carter Cash in Walk the Line and was later nominated in that same category for Wild in 2014, which she also produced. Witherspoon also starred in beloved films Sweet Home Alabama, Legally Blonde, and Election, as well as the award-winning television series Big Little Lies, Little Fires Everywhere, and The Morning Show. Her other film credits include Disney’s A Wrinkle in Time, Universal Pictures’ animated musical comedy Sing and Sing 2. In addition to her acting and producer roles, Witherspoon is an author and entrepreneur. In 2018, Reese released her first book, Whiskey in a Teacup, which was an instant bestseller. In 2016, she established Hello Sunshine, a media brand and content company dedicated to female authorship and storytelling across all platforms. Hello Sunshine is also home to Reese’s Book Club and Reese’s YA Book Club, which focus on storytelling with women at the center. Witherspoon sold Hello Sunshine to Blackstone in September 2021. Now Hello Sunshine is the cornerstone of a larger media company called Candle Media. Witherspoon is an advocate and activist for women’s issues across the globe.


Xindi Yan left behind a small city in China to realize her dream of being a published artist. She traveled thousands of miles to study, live, and work in New York. Having always wanted to illustrate children’s books, Xindi buried herself in countless books and drawings. She is the illustrator of Sylvia Rose and the Cherry Tree by Sandy Shapiro Hurt, the Craftily Ever After series by Martha Maker and The Itty Bitty Witch by Trisha Speed Shaskan. When not drawing, she likes to keep busy with lots of crafts and cooking. Xindi currently lives in Brooklyn with her husband and dreams of having a puppy one day.
"An earnest and unabashed celebration of youthful entrepreneurial zeal that feels very of the moment." --Publishers Weekly

"Yan uses vivid, pastel colors . . . Extreme angles in several of the illustrations effectively convey a sense of perpetual motion and heighten the story’s tension, drawing readers in. An especially effective, glitter-strewn spread portrays Frank looming large and seemingly running off the page while Betty looks on, stricken at the ensuing mess . . . Witherspoon’s rollicking text never holds back, replete with amusing phrases such as “sweet cinnamon biscuits,” “bouncing biscuits,” and “busted biscuits.” As Betty says, “Being busy is a great way to be.” Young readers are sure to agree." --Kirkus reviews

"Yan’s illustrations feature appealing cartoonish characters with oversized heads and large eyes, complementing the ebullient text that’s interspersed with many idiosyncratic expressions involving biscuits. This is a fun and high-spirited story for the fans of “Fancy Nancy,” “­Pinkalicious,” or “Freckleface Strawberry.” VERDICT A book that will undoubtedly find its way to many collections owing to the popularity of its author and the sweetness of its protagonist." --School Library Journal