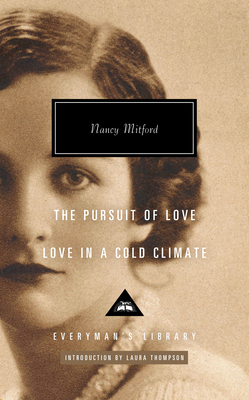 
On Our Shelves Now
A hardcover omnibus of the comic masterpieces that made Nancy Mitford famous: madcap tales of growing up among the privileged and eccentric in England and finding love in all the wrong places.

Nancy Mitford modeled the characters in her two best-known novels on her own famously unconventional family. We are introduced to the Radletts through the eyes of their cousin Fanny, visiting their Gloucestershire estate. Uncle Matthew is the blustering patriarch, known to hunt his children when foxes are scarce; Aunt Sadie is the vague but doting mother; and the seven Radlett children are recklessly eager to grow up.

The Pursuit of Love follows the travails of Linda, the most beautiful and wayward Radlett daughter, who falls first for a stuffy Tory politician, then an ardent communist, and finally a French duke named Fabrice.

Love in a Cold Climate focuses on Polly Hampton, long groomed for the perfect marriage by her fearsome mother, Lady Montdore, but secretly determined to find her own path. Together these hilarious novels vividly evoke the lost glamour of aristocratic life in England between the wars.

Everyman's Library pursues the highest production standards, printing on acid-free cream-colored paper, with full-cloth cases with two-color foil stamping, decorative endpapers, silk ribbon markers, European-style half-round spines, and a full-color illustrated jacket.
NANCY MITFORD (1904–1973) was the eldest daughter of Lord Redesdale. She grew up with her five sisters and one brother on the family estate. A beauty and a wit, she became one of the "bright young things" of the 1920s, and a close friend of Henry Green, Evelyn Waugh, John Betjeman, and their circle. She began writing novels while in her twenties. In all, she wrote eight novels and four biographies (of Madame de Pompadour, Louis XIV, Voltaire, and Frederick the Great).

LAURA THOMPSON is a writer and journalist. She won the Somerset Maugham Award for her first book, The Dogs, and is the author of the critically acclaimed biography of Nancy Mitford, Life in a Cold Climate; The Six: The Lives of the Mitford Sisters; and Agatha Christie: An English Mystery.
“Nancy Mitford’s art at its best is so fine, so beautifully shimmering with wit and gaiety, that it creates a standard of its own.” —The New Republic

“Mitford, describing in a tart and easy fashion the diverting activities of a titled English family, is mocking, good-tempered, and very funny.” —The New Yorker