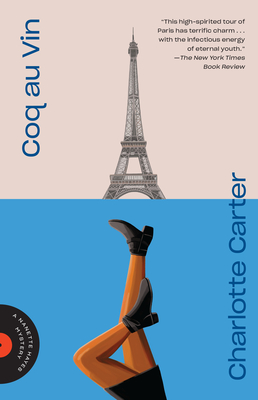 This is book number 2 in the A Nanette Hayes Mystery series.

A New York Times Best Mystery Novel of the Year

In the second installment of the Nanette Hayes Mystery series, Nan is on her way to Paris in search of a missing relative. . . but will she lose more than just her heart in the city of love?

Nanette's life is finally getting back to normal when her mother calls her with some upsetting news: Nan's beloved bohemian Aunt Vivian has gone missing. Normally this is par for the course with Viv, but this time the circumstances surrounding Vivian's disappearance are rather troubling. Would Nan be up to brushing up on her French language skills and flying to Paris to track her down?

Would she ever. Now swanning about her favorite city, Nan has a hard time keeping her attention on the task at hand. . . especially after she meets handsome violinist Andre, a fellow street musician from Detroit. But trouble has a way of finding Nan, and her search for Vivian lands her in the underbelly of historic Paris and in the crosshairs of some of its most dangerous denizens.
CHARLOTTE CARTER is the author of an acclaimed mystery series featuring Nanette Hayes, a young Black American jazz musician with a lust for life and a talent for crime-solving, and the Cook County mystery series, set in Chicago during the 1960s. Her short fiction has appeared in a number of American and British anthologies. Charlotte Carter has lived in the American Midwest, North Africa, and France. She currently resides in New York City.
“This high-spirited tour of Paris has terrific charm . . . with the infectious energy of eternal youth.”
—The New York Times Book Review

“Charlotte Carter has . . . the practiced discipline needed to craft functional, human sentences [that] flow one into the next without embellishment or posturing.”
—Crime Times

“A top-notch mystery, engaging throughout and quite moving at the end.”
—Publishers Weekly

“Carter’s characters rarely do what one might expect. Reading her work just gives you a jolt.”
—Catapult Magazine