How the World Really Works: The Science Behind How We Got Here and Where We're Going (Hardcover) 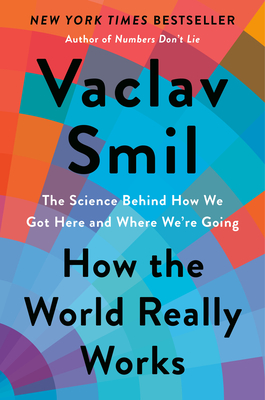 How the World Really Works: The Science Behind How We Got Here and Where We're Going (Hardcover)

“A new masterpiece from one of my favorite authors… [How The World Really Works] is a compelling and highly readable book that leaves readers with the fundamental grounding needed to help solve the world’s toughest challenges.”—Bill Gates

“Provocative but perceptive . . . You can agree or disagree with Smil—accept or doubt his ‘just the facts’ posture—but you probably shouldn’t ignore him.”—The Washington Post

An essential analysis of the modern science and technology that makes our twenty-first century lives possible—a scientist's investigation into what science really does, and does not, accomplish.

We have never had so much information at our fingertips and yet most of us don’t know how the world really works. This book explains seven of the most fundamental realities governing our survival and prosperity. From energy and food production, through our material world and its globalization, to risks, our environment and its future, How the World Really Works offers a much-needed reality check—because before we can tackle problems effectively, we must understand the facts.

In this ambitious and thought-provoking book we see, for example, that globalization isn’t inevitable—the foolishness of allowing 70 per cent of the world’s rubber gloves to be made in just one factory became glaringly obvious in 2020—and that our societies have been steadily increasing their dependence on fossil fuels, such that any promises of decarbonization by 2050 are a fairy tale. For example, each greenhouse-grown supermarket-bought tomato has the equivalent of five tablespoons of diesel embedded in its production, and we have no way of producing steel, cement or plastics at required scales without huge carbon emissions.

Ultimately, Smil answers the most profound question of our age: are we irrevocably doomed or is a brighter utopia ahead? Compelling, data-rich and revisionist, this wonderfully broad, interdisciplinary guide finds faults with both extremes. Looking at the world through this quantitative lens reveals hidden truths that change the way we see our past, present and uncertain future.
Vaclav Smil is Distinguished Professor Emeritus at the University of Manitoba. He is the author of over forty books on topics including energy, environmental and population change, food production and nutrition, technical innovation, risk assessment, and public policy. No other living scientist has had more books (on a wide variety of topics) reviewed in Nature. A Fellow of the Royal Society of Canada, in 2010 he was named by Foreign Policy as one of the Top 100 Global Thinkers.
“A new masterpiece from one of my favorite authors… [How The World Really Works] is a compelling and highly readable book that leaves readers with the fundamental grounding needed to help solve the world’s toughest challenges.”—Bill Gates

“You can agree or disagree with Smil—accept or doubt his ‘just the facts’ posture—but you probably shouldn’t ignore him. . . In Smil’s provocative but perceptive view, unrealistic notions about carbon reduction are partly, and ironically, attributable to the very productivity that societies achieved by substituting machine work, powered by fossil fuels, for draft animals and human laborers.”—The Washington Post

"[It is] reassuring to read an author so impervious to rhetorical fashion and so eager to champion uncertainty. . . Smil’s book is at its essence a plea for agnosticism, and, believe it or not, humility — the rarest earth metal of all. His most valuable declarations concern the impossibility of acting with perfect foresight. Living with uncertainty, after all, “remains the essence of the human condition.” Even under the most optimistic scenario, the future will not resemble the past. "—The New York Times

"How the World Really Works represents the highly readable distillation of this lifetime of scholarship… Mr. Smil looks over the horizon of the future with humility and calmness, foreseeing 'a mixture of progress and setbacks, of seemingly insurmountable difficulties and near-miraculous advances.'”—Wall Street Journal

“The renowned energy scientist … aims to [recenter] materials rather than electronic flows of data as the bedrock of modern life — largely through examining what he calls the four pillars of modern civilization: cement, steel, plastics and ammonia.” —The New York Times Magazine

"A scientific panorama of our well-being and how it can be sustained in our current tumultuous times and beyond. [Smil] aims to combat the widespread “comprehension deficit” about basic scientific facts, and he seeks to “explain some of the most fundamental ruling realities governing our survival and our prosperity.” That aim is marvelously achieved…[this is] an exceptionally lucid, evenhanded study of the scientific basis of our current and future lives.”—Kirkus, STARRED review