What Is the AIDS Crisis? (What Was?) (Paperback) 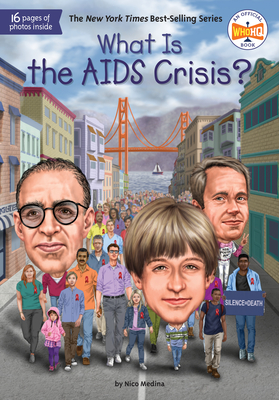 What Is the AIDS Crisis? (What Was?) (Paperback)


On Our Shelves Now
In this addition to the New York Times bestselling series, learn how incredible activists made the public aware of AIDS and spurred medical breakthroughs.

In the early 1980s, the first cases of  a devastating and fatal new disease appeared, a disease that at first struck only gay men and was later identified as HIV/AIDS. It was the beginning of what became a worldwide health crisis that the US government ignored for years and that unfairly heightened prejudice against the LGBTQ+ community. To this day, the AIDS Crisis continues to disproportionately affect both the LGBTQ+ community and people of color. Nico Medina has written an accurate and affecting history of a terrible time, spotlighting the heroic efforts of AIDS activists who fought for medical research and new medicines, for proper health care for patients, and for compassionate recognition of people with AIDS.
Nico Medina is the author of several Who HQ books, including What Was Stonewall?, Who Is RuPaul?, Where Is Alcatraz?, Who Was Aretha Franklin?, and What Was the Ice Age?