Run Like a Pro (Even If You're Slow): Elite Tools and Tips for Runners at Every Level (Paperback) 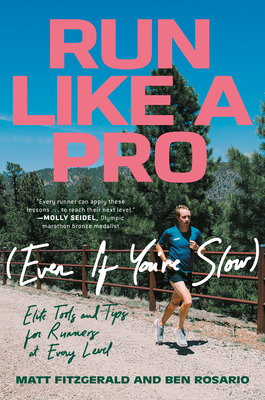 Run Like a Pro (Even If You're Slow): Elite Tools and Tips for Runners at Every Level (Paperback)


On Our Shelves Now
Cutting-edge advice on how to achieve your personal best, for everyone from casual runners to ultramarathoners.

In 80/20 Running, respected running and fitness expert Matt Fitzgerald introduced his revolutionary training program and explained why doing 80 percent of runs at a lower intensity and just 20 percent at a higher intensity is the best way for runners at all levels--as well as cyclists, triathletes, and even weight-loss seekers--to improve their performance.

Now, in this eye-opening follow-up, Fitzgerald teams with Olympic coach Ben Rosario to expand and update the 80/20 program to include ultramarathon training and such popular developments as the use of power meters.

New research has bolstered the case that the 80/20 method is in fact that most effective way to train for distance running and other endurance sports. Run Like a Pro (Even If You’re Slow) shows readers how to take the best practices in elite running and adopt them within the limits of their own ability, lifestyle, and budget.
Matt Fitzgerald is an acclaimed endurance sports writer, coach, and certified sports nutritionist. He has authored or coauthored more than 25 books, including The Comeback Quotient, Running the Dream and How Bad Do You Want It? Also an award-winning journalist, he has written for Bicycling, Maxim, Men’s Journal, Outside, Runner’s World, Shape, Triathlete, and other major magazines and websites.

An All-State runner in high school and an All-American triathlete as an adult, he continues to compete at a high level as both a runner and a triathlete. He has coached other endurance athletes since 2001. He is a cofounder of 80/20 Endurance, an Internet-based training resource of runners and other athletes.

Ben Rosario is the head coach of the HOKA NAZ Elite professional distance running team in Flagstaff, Ariz. His athletes have finished in the top ten of the Boston, Chicago, New York City and London Marathons, and have won multiple national titles including the 2020 Olympic Trials Marathon. Before founding NAZ Elite, he co-owned Big River Running Company, a run-specialty store in his hometown of Saint Louis, Mo. Ben has co-authored two previous running books, Inside A Marathon and Tradition, Class, Pride.
Praise for Run Like a Pro (Even If You're Slow)

“The training of an elite marathoner can seem mysterious to the majority of runners; this book is an excellent inside look into the ways the pros prepare physically and mentally to compete at their best. Every runner can apply these lessons to their own training in order to reach their next level.”--Molly Seidel, Olympic Marathon Bronze Medalist

“Fitzgerald and Rosario make a perfect team, distilling decades of in-the-trenches experience into clear and practical advice that any runner who wants to get better can (and should) apply.”--Alex Hutchinson, author of Endure: Mind, Body, and the Curiously Elastic Limits of Human Performance