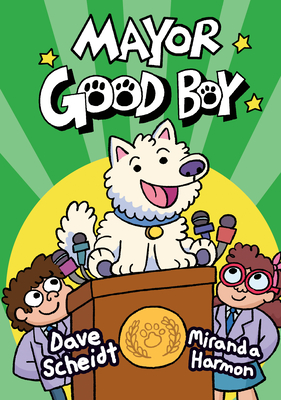 This is book number 1 in the Mayor Good Boy series.

We’re not sure if all kids are obsessed with dogs, or if our shop dogs happen to attract a crowd of dog and book-loving kids. Due to our canine-obsessed customers, we are quite literally always looking for the next great graphic novel for fans of the Dog Man series, and I think that Mayor Good Boy might just do the trick!

— Becca
There's a new dog in town! Finally Greenwood gets the mayor they've been waiting for--Mayor Good Boy! In this graphic novel, a very good dog is going to save his town, one hilarious try at a time.

The votes are in and the new mayor is...A DOG?!

This dog will do more than shake paws. Mayor Good Boy is here to help Greenwood become a town filled with kindness, starting with fetching help for the local zoo. With foes around every corner trying to put a stop to Mayor Good Boy's campaign of fun, are there cheese snacks and belly rubs in his future? Or will the whole town suddenly have a flea problem?

In the hilarious Mayor Good Boy graphic novel series, everyone can make the world a better place, whether you’re a human or a dog.
Dave Scheidt is a radical dude from Chicago. When he's not writing comic books, he enjoys eating pizza.

Miranda Harmon lives in Los Angeles. She works in animation, and Mayor Good Boy is her debut graphic novel.
“In this graphic novel, the underdogs turn out to be the real heroes.... Presents a timely topic through likable characters.” --Kirkus Reviews