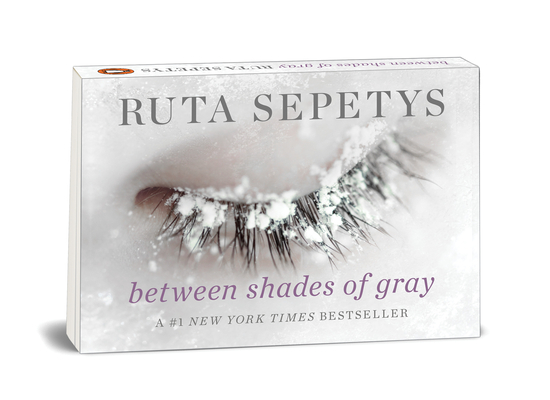 
On Our Shelves Now
From New York Times and international bestseller Ruta Sepetys comes a story of loss and of fear -- and ultimately, of survival. Now in a revolutionary new mini format, this read is more portable than ever.

Carnegie Medal winner Ruta Sepetys's debut is now available as a Penguin Mini edition. Complete and unabridged, the book's revolutionary landscape design and ultra-thin paper makes it easy to hold in one hand without sacrificing readability. Perfectly sized to slip into a pocket or bag, Penguin Minis are ideal for reading on the go.

"Few books are beautifully written, fewer still are important; this novel is both." --The Washington Post


Fifteen-year-old Lina is a Lithuanian girl living an ordinary life -- until Soviet officers invade her home and tear her family apart. Separated from her father and forced onto a crowded train, Lina, her mother, and her young brother make their way to a Siberian work camp, where they are forced to fight for their lives. Lina finds solace in her art, documenting these events by drawing. Risking everything, she imbeds clues in her drawings of their location and secretly passes them along, hoping her drawings will make their way to her father's prison camp. But will strength, love, and hope be enough for Lina and her family to survive?
A moving and haunting novel perfect for readers of The Book Thief.

Praise for Between Shades of Gray:

"Heart-wrenching . . . an eye-opening reimagination of a very real tragedy written with grace and heart." --The Los Angeles Times

"At once a suspenseful, drama-packed survival story, a romance, and an intricately researched work of historial fiction." --The Wall Street Journal

* "Beautifully written and deeply felt . . . An important book that deserves the widest possible readership." --Booklist, starred review
Ruta Sepetys (www.rutasepetys.com) is an internationally acclaimed, #1 New York Times bestselling author of historical fiction published in over sixty countries and forty languages. Sepetys is considered a "crossover" novelist, as her books are read by both teens and adults worldwide. Her novels Between Shades of Gray, Out of the Easy, and Salt to the Sea have won or been shortlisted for more than forty book prizes, and are included on more than sixty state award lists. Between Shades of Gray was adapted into the film Ashes in the Snow, and her other novels are currently in development for TV and film. Winner of the Carnegie Medal, Ruta is passionate about the power of history and literature to foster global awareness and connectivity. She has presented to NATO, to the European Parliament, in the United States Capitol, and at embassies worldwide. Ruta was born and raised in Michigan and now lives with her family in Nashville, Tennessee. Follow her on Twitter and Instagram @RutaSepetys.