The Little Engine That Could: 90th Anniversary Edition (Hardcover) 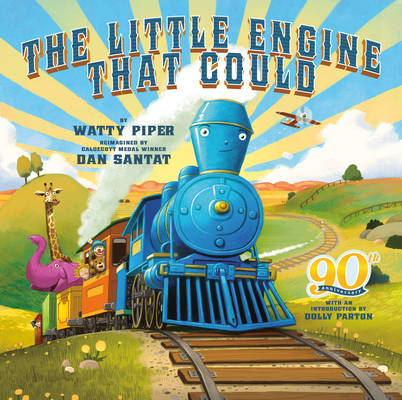 The Little Engine That Could: 90th Anniversary Edition (Hardcover)


Special Order - Usually Arrives in 1-5 Days
Celebrate the 90th anniversary of The Little Engine That Could with this all-time classic reillustrated by Caldecott Award-winning artist Dan Santat! A perfect gift for all the milestones in your life--from graduation to birthdays and more!

The kindness and determination of the Little Blue Engine have inspired millions of children around the world since the story was first published in 1930. Cherished by readers for ninety years, The Little Engine That Could is a classic tale of a little engine that, despite her size, triumphantly pulls a train full of wonderful things to the children waiting on the other side of a mountain.

This anniversary edition features the original text, all-new reimagined artwork and an introduction from Caldecott Medal-winner Dan Santat, and a special letter from Dolly Parton, award-winning singer-songwriter and founder of Dolly Parton's Imagination Library.
Watty Piper was a pen name of Arnold Munk, an owner of the publishing firm Platt & Munk. Arnold Munk was born in Hungary and, as a child, moved with his family to Chicago. He later moved to New York, where he died in 1957. Arnold Munk used the name Watty Piper as both an author of children's books and as the editor of many of the books that Platt & Munk published.

Dan Santat is the author and illustrator of the Caldecott Award-winning The Adventures of Beekle: The Unimaginary Friend, as well as the New York Times Best Selling titles, Are We There Yet?, After the Fall, and others. He is also the creator of Disney's animated hit, The Replacements. Dan lives in Southern California with his wife, two kids, and a menagerie of pets. Visit him at dantat.com.