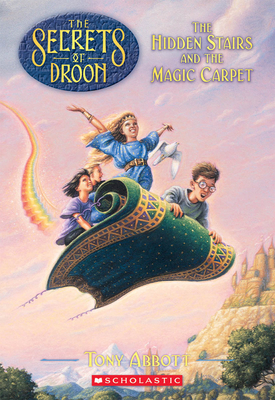 This is book number 1 in the The Secrets of Droon series.

When Neal and Julie agree to help Eric straighten up his basement, they never imagine that they're in for more than getting a little dusty. But as the three kids follow a soccer ball into the small room under the basement stairs, the floor suddenly evaporates to reveal a rainbow staircase to another world!Before they have a chance to look around, they are caught in the midst of a battle. Shiny red men riding giant lizards are shooting arrows straight at them. They are saved by Princess Keeah of Droon who tells them the red men are warriors for the evil Lord Sparr. She promises to help them get home if they will carry a message for her.The message is delivered successfully but the brave Keeah has been captured by Lord Sparr. Equipped with a cape of invisibility, a six legged camel/horse, and a talkative spider-troll named Max, the three children manage to sneak in and rescue Keeah.Astride a magic carpet, Julie, Eric, Neal, and Keeah fly to the stairs that will take the three "Upper World" children back home. The kids are astonished to discover that no time has passed back in their own world. But even as they marvel at their adventure, they realize that Princess Keeah has left them a secret message: Your dreams will tell you to return!

Tony Abbott is the author of more than ninety books for young readers, including THE SECRETS OF DROON series; middle-grade novel KRINGLE; and THE HAUNTING OF DEREK STONE series. He was the recipient of the 2006 Golden Kite Award, as well as the 2009 Edgar Award. Tony was born in Ohio, and now lives with his wife and two daughters in Trumbull, Connecticut. Visit him online at www.tonyabbottbooks.com.