Talking to the Sky: A Memoir of Living My Best Life in A Sh!t Show (Paperback) 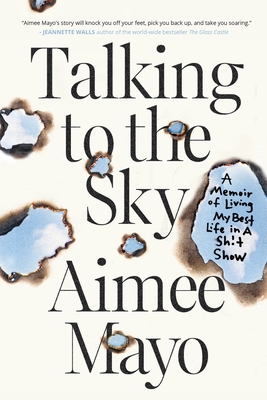 Talking to the Sky: A Memoir of Living My Best Life in A Sh!t Show (Paperback)

A tragic yet triumphantly hilarious story about going after your dreams against all odds- written by best selling author and award winning songwriter Aimee Mayo.

This book has been praised by world wide best selling authors and too many celebrities to count.

Aimee Mayo grew up in deep Alabama, rocked by the blow of a drunk man's fist before she even made it out of the womb. Her colorful and charismatic father went from a gambling janitor to a multi-millionaire, but died homeless. Her mother was wonderful when she wasn't popping pain pills like M&M's and her stepdad made a weird science out of psychological abuse. Throughout her teens, Aimee survived by writing compulsively in diaries, dreaming of becoming a songwriter and finding her soulmate.

After accidentally burning down her house-just one in a series of disasters-at twenty years old she found herself lost with no path to the life she had always longed for. She tried to kill herself and almost succeeded.

Finally, Aimee made it to Nashville. She started out a waitress, married to a wife-beating country singer, but never lost sight of her dreams. Talking to the Sky is her unforgettable memoir, the harrowing and hilarious story of believing in faith over fear and going after your dreams when everything is going against you.