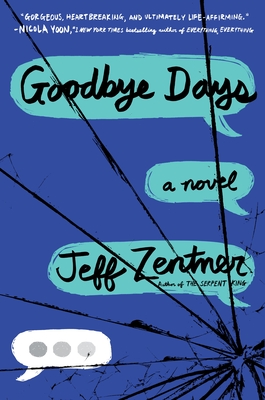 
Availability to be confirmed
“Gorgeous, heartbreaking, and ultimately life-affirming.” —Nicola Yoon, #1 New York Times bestselling author of Everything, Everything.

Perfect for fans of Turtles All the Way Down,Thirteen Reasons Why, and Zentner's own The Serpent King, one of the most highly acclaimed YA novels of 2016, Goodbye Days asks what you would do if you could spend one last day with someone you lost.

Where are you guys? Text me back. That's the last message Carver Briggs will ever send his three best friends, Mars, Eli, and Blake. He never thought that it would lead to their death.

Now Carver can’t stop blaming himself for the accident and even worse, a powerful judge is pressuring the district attorney to open up a criminal investigation.

Luckily, Carver has some unexpected allies: Eli’s girlfriend, the only person to stand by him at school; Dr. Mendez, his new therapist; and Blake’s grandmother, who asks Carver to spend a “goodbye day” together to share their memories and say a proper farewell.

Soon the other families are asking for their own goodbye day with Carver—but he’s unsure of their motives. Will they all be able to make peace with their losses, or will these goodbye days bring Carver one step closer to a complete breakdown or—even worse—prison?

"Jeff Zentner, you perfectly fill the John-Green-sized hole in our heart." —Justine Magazine

“Hold on to your heart: this book will wreck you, fix you, and most definitely change you.” —Becky Albertalli, Morris Award-winning author of Simon vs. the Homo Sapiens Agenda
Jeff Zentner is the acclaimed author of The Serpent King. In addition to writing, he is also a singer-songwriter and guitarist who has recorded with Iggy Pop, Nick Cave, and Debbie Harry. Goodbye Days is his love letter to the city of Nashville and the talented people who populate it. He lives in Nashville with his wife and son. You can follow him on Facebook, on Instagram, and on Twitter at @jeffzentner.
“Tender, honest, moving, and lyrical. Zentner is the real thing.” —Benjamin Alire Sáenz, winner of the PEN/Faulkner Award for Fiction and Printz Honor winner

"Zentner does an excellent job in creating empathetic characters, especially his protagonist Carver, a budding writer whose first-person account of his plight is artful evidence of his talent."—Booklist, Starred

"Racial tensions, spoiled reputations, and broken homes all play roles in an often raw meditation on grief and the futility of entertaining what-ifs when faced with awful, irreversible events."—Publishers Weekly, Starred

"[The] kind of intelligent, intense, and life-affirming tale that will resonate with teens seeking depth and honesty." —SLJ

"Tissues not optional." —The Bulletin

“Will fill the infinite space that was left in your chest after you finished The Perks ofBeing a Wallflower.” —BookRiot.com

“A story about friendship, family and forgiveness, it’s as funny and witty as it is utterly heartbreaking.” —PasteMagazine.com

“A brutally honest portrayal of teen life . . . [and] a love letter to the South from a man who really understands it.” —Mashable.com

“Zentner’s great achievement — particularly impressive for a first novel — is to make us believe three such different people could be friends. He also manages to blend a dank, oppressive, Flannery O’Connor-esque sense of place with humor and optimism .... I adored all three of these characters and the way they talked to and loved one another.” —New York Times Book Review