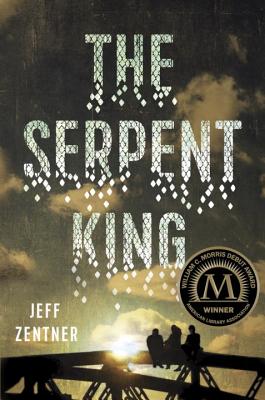 A critically acclaimed debut novel about three teens who find themselves--and each other--while on the cusp of graduating from high school with hopes of leaving their small-town behind. And don't miss the author's highly anticipated new book, In the Wild Light!

Dill isn't the most popular kid at his rural Tennessee high school. After his father fell from grace in a public scandal that reverberated throughout their small town, Dill became a target. Fortunately, his two fellow misfits and best friends, Travis and Lydia, have his back.

But as they begin their senior year, Dill feels the coils of his future tightening around him. His only escapes are music and his secret feelings for Lydia--neither of which he is brave enough to share. Graduation feels more like an ending to Dill than a beginning. But even before then, he must cope with another ending--one that will rock his life to the core.

"A book you won't be able to resist or forget. The Southern boy in me savored every syllable and the reader in me fell in love with every page." –John Corey Whaley, National Book Award finalist and Printz Award winner

"Move over, John Green; Zentner is coming for you." –The New York Public Library

"Will fill the infinite space that was left in your chest after you finished The Perks of Being a Wallflower." –Book Riot

"A story about friendship, family and forgiveness, it's as funny and witty as it is utterly heartbreaking." –Paste Magazine

"A brutally honest portrayal of teen life . . . [and] a love letter to the South from a man who really understands it." –Mashable

"I adored all three of these characters and the way they talked to and loved one another." –New York Times Book Review

"[T]his sepia-toned portrait of small-town life serves as a moving testament to love, loyalty, faith, and reaching through the darkness to find light and hope." –PW, Starred

"Pens would run dry if readers were to underline extraordinary sentences--the kind that are so true, or funny, or beautiful that they clamp hearts. . . . [An] extraordinary YA debut." –Shelf Awareness, Starred

"The third-person narration manages to convey distinct flavor for each deeply personal and introspective storyline, so each character emerges as an authentic individual, flawed yet lovable, and readers will find themselves drawn by the heartstrings into their complex lives." –The Bulletin, Starred

"Thorough characterization and artful prose allow readers to intimately experience the highs and lows of these three friends .... Recommended for fans of John Green and Rainbow Rowell." –SLJ