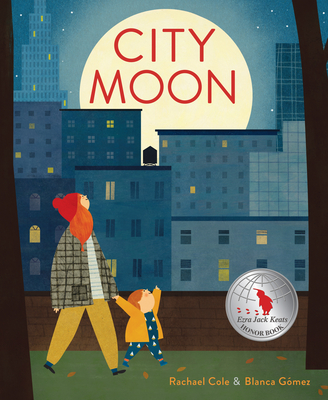 
Availability to be confirmed
A little boy and his mother take a nighttime walk to search for the moon in this Ezra Jack Keats New Writer Honor book. Gentle and keenly observed, this bedtime story is sure to appeal to fans of Kevin Henkes's Kitten's First Full Moon and young children who find the moon fascinating.

Soothing text and hip, colorful collage style illustrations create a nighttime story that follows a little boy and his Mama as they walk around their neighborhood looking for the moon. As the elusive moon plays peek-a-boo behind buildings and clouds, the little boy asks simple questions about it, and his Mama patiently answers every one. When finally the moon appears—bright and white and round and glowing—the mama and her boy stop and wait for it to disappear again. The moonlit walk continues until the boy yawns and Mama lifts him into her arms and whispers, "it is time for bed."
Rachael Cole received an Ezra Jack Keats New Writer Honor for City Moon, her picture book debut, which she wrote based on her own nighttime walks with her son looking for the moon.. She is also the co-author of Ladies Drawing Night, published by Chronicle in 2016, along with Leah Goren and Julia Rothman. She works as an art director in children’s publishing. Rachael lives in Brooklyn. Learn more at rachaelcole.net, on Twitter @rachael_cole, and on Instagram @rachaelcole.

Blanca Gómez started creating illustrations for her mother when she was a child. Now she illustrates for clients around the world. She illustrated One Family by George Shannon which Kirkus called, "visually striking" in a starred review, and Besos for Baby by Jen Arena. Blanca lives and works in Madrid, Spain. Visit her on the web at cosasminimas.com.
“…will ease young readers into a restful mood.” —The New York Times