George and Martha: Round and Round Early Reader (Green Light Readers Level 2) (Paperback) 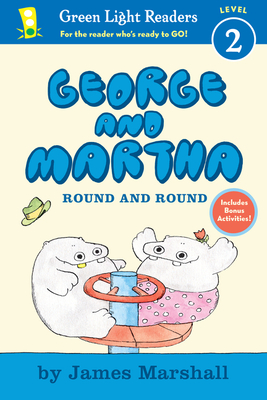 George and Martha: Round and Round Early Reader (Green Light Readers Level 2) (Paperback)


Special Order - Usually Arrives in 1-5 Days
Great friends aren’t hard to find—they’re right here! With original art and text from Marshall’s storybooks and themes that will resonate with beginning readers, these deeply humorous, deeply honest stories are sure to inspire a love of books and reading.

George and Martha: Round and Round contains the classic stories “The Clock,” “The Trip,” and “The Artist.” Includes fun and educational activities!
James Marshall (1942–1992) created dozens of exuberant and captivating books for children, including The Stupids, Miss Nelson Is Missing!, and the ever-popular George and Martha books. Before creating his canon of classic, hilarious children’s books, James Marshall played the viola, studied French, and received a master’s degree from Trinity College. He also doodled. It was the doodles, and the unforgettable characters that emerged from them, that led him to his life’s work as one of the finest creators of children’s books of the twentieth century. In 2007, James Marshall was posthumously awarded the Laura Ingalls Wilder medal for his lasting contribution to literature for children.
"The spare text, a treat for beginning readers or for sharing with pre-readers, perfectly matches the deceptively simple illustrations, which glow with humor and affection." -- School Library Journal for George and Martha: Round and Round