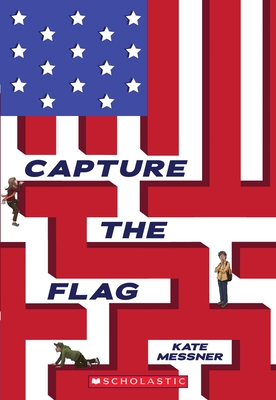 A stolen flag, a secret society, and three complete strangers . . .Anna, José, and Henry have never met, but they have more in common than they realize. Snowed in together at a chaotic Washington, DC, airport, they encounter a mysterious tattooed man, a flamboyant politician, and a rambunctious poodle named for an ancient king. Even stranger, news stations everywhere have just announced that the famous flag that inspired "The Star-Spangled Banner" has been stolen! Anna, certain that the culprits must be snowed in, too, recruits Henry and José to help find the thieves and bring them to justice. But when accusations start flying, they soon realize there's even more than a national treasure at stake. With unexpected enemies lurking around every corner, will the trio solve the heist before the flag is lost forever?

Kate Messner is the author of The Seventh Wish; All the Answers; The Brilliant Fall of Gianna Z., winner of the E. B. White Read Aloud Award for Older Readers; Capture the Flag, an SCBWI Crystal Kite Award winner; Hide and Seek; Manhunt; and the Ranger in Time and Marty McGuire chapter book series. A former middle-school English teacher, Kate lives on Lake Champlain with her family and loves reading, walking in the woods, and traveling. Visit her online at katemessner.com.

Awards for CAPTURE THE FLAGA Junior Library Guild SelectionPraise for CAPTURE THE FLAG"A fast-paced mystery . . . a sparkling start for a promising new series." --KIRKUS REVIEWS"A novel as cinematic in execution as it is patriotic in theme." --PUBLISHERS WEEKLY

Awards for CAPTURE THE FLAGA Junior Library Guild SelectionPraise for CAPTURE THE FLAG"A fast-paced mystery . . . a sparkling start for a promising new series." --KIRKUS REVIEWS"A novel as cinematic in execution as it is patriotic in theme." --PUBLISHERS WEEKLY