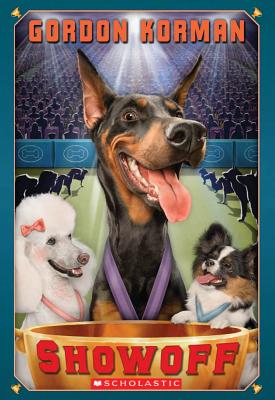 Showoff: someone who is given to bragging, having a swelled head, boasting, swaggering, knowing it all . . .Griffin Bing and his friends are back -- and this time, things have gone to the dogs!After former attack dog Luthor goes berserk at a dog show, he's accused of ruining the career of the three-time national champion. Griffin has always wondered whether you could teach such a vicious dog new tricks . . . but he also smells a setup of some kind. He feels bad for Luthor --- bad enough to spring him from the pound.The only way for Luthor to make everything right is to do the unthinkable . . . and become the new national champion. Can Griffin Bing, The Man With The Plan, turn this beast into a beauty? Very soon, the whole world will want to know the answer.
Gordon Korman is the beloved author of over one hundred novels for young readers, including hilarious middle-grade classics such as the Macdonald Hall series, I Want to Go Home and Slacker. Born in Montreal, Quebec, Gordon grew up in Thornhill, Ontario, and now lives in New York with his family. Visit him online at www.gordonkorman.com.
Praise for Swindle:"Pure fun from top to bottom." - School Library Journal"Korman's fast moving, feel-good suspense novel will have middle schoolers, especially boys, turning the pages." - VOYAPraise for Zoobreak:"Korman again knocks it out of the park...interesting, full of humor, and good fun." - VOYA"Korman's second tale of 11-year-old Mr. Fix-it Griffin and his friends is a page-turning adventure....The author's fans will be more than pleased." - Kirkus"This book is overflowing with energy, and each chapter ends with the promise of more excitement. In addition, woven perfectly into the story...are the themes of friendship, working together, accomplishing the impossible, and having the courage to do what is right." - www.Kidreads.comPraise for Framed:“Goofball-funny and addictive” – Kirkus Reviews“Make no mistake; this mystery will keep readers guessing until the end, and there is enough action to keep readers on the edge of their seats.” – School Library Journal